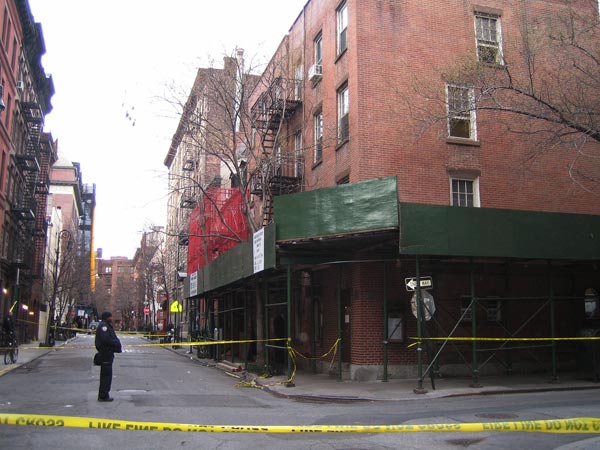 An article in today’s Post reports on West Village rancor surrounding Chumley’s, the legendary Bedford Street speakeasy that’s been closed since April after an interior wall collapsed during repair work. But while the Post drops the name of the building’s managing agent, one Margaret Streicker Porres, they fail to point out that the notorious Porres was declared one of the 10 worst landlords of ’06 by the Village Voice. (Pull quote: "When Porres bought the building two years ago, I allowed her into my apartment to measure and look around. I thought, she's a young woman, what's the harm? Little did I know I was measuring my coffin.")

Could this have something to do with the six month delay? The bar was supposed to re-open this month, but it seems a contractor hasn’t even been hired. Chumley’s owner Steve Shlopak insists that the hold up is due to “surprises”, such as asbestos, found during an inspection. But since he hopes to buy the building from Porres’s company, we wonder if he’s just playing nice.

Not playing nice are neighborhood residents, who are pissed about the construction “eyesore” on their charming street. "The whole situation has sucked out a piece of the heart of the neighborhood!" one long-time resident cried to The Post. Anyone who’s had the displeasure of living in one of Porres’s buildings – which have been cited for inadequate supply of “heat, hot water, or electricity; leaking ceilings; broken stairwells; exposed live wires; and rodents” – could probably relate. (Calls made to Ms. Porres’s office have not yet been returned; Chumley’s phone number has been disconnected, above photo taken after the April collapse.)

#bar
#bedford street
#construction
#food
#the post
#village voice
#west village
Do you know the scoop? Comment below or Send us a Tip