Last fall, beloved neighborhood French bistro Café Loup was shuttered and seized due to unpaid taxes. It unexpectedly and happily reopened a week later, but it seems that the initial problems were never fully resolved, because Café Loup has once again been shuttered and seized by the New York State Department of Taxation and Finance over unpaid taxes. And this time, it might be closed for good.

We've reached out to Café Loup for comment, but Eater reports that the notice on the door of the cafe says it is now in possession of the state, much like the notice that was placed there last September. The most recent warrant, which was filed today, shows that the cafe has $176,072.21 in taxes due. There are five other past warrants dating back to June that haven't been paid either totaling $317,922.21—which brings the total amount due to a whopping $493,994.42.

Friends, it’s over. I just got word that Café Loup is dead for good. Pour out a Sancerre with me tonight for Dien and Jay and the rest of the gang 😩#LoupisDead

Initially opening on 13th Street near University Place in 1977, Café Loup moved to its permanent home at 105 W. 13th Street, near Sixth Avenue, in the early '80s. As Eater noted, it became a fixture for the city’s literary and publishing scene, counting Paul Simon, Susan Sontag, and Paul Auster among its regulars. The NY Times called it "the genteel but unpretentious West Village bistro that continues to bridge generations in terms of its appeal to editors, academics and writers." (They also recommended it in 2012, calling it a great bar for "conversation, and not necessarily your own.")

Back in September, a Tax Department spokesperson James Gazzale told us, "Seizing a business is always a last resort. Generally speaking, after seizing a business, we continue being in communication with the owner looking for mutually beneficial ways to resolve that debt. Once we find a way forward, and feel confident enough to return the keys to the business, we do so." 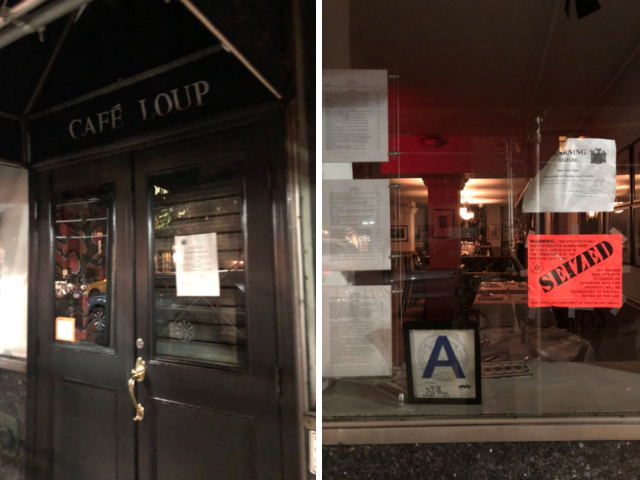 In the wake of the closing last fall, there was an outpouring of support from locals and regulars for the cafe, which was known as a fixture for the city’s literary and publishing scene (counting Paul Simon, Susan Sontag, and Paul Auster among its regulars). Sadie Stein wrote in The New Yorker, "Loup was a place with serious regulars; neighbors who dined and drank there literally every night, poets and publishers who held down favorite banquettes, older people who were treated with kindness and respect...I sort of thought I’d become inured to treasured places closing in New York. But this one hurts. I loved Café Loup, not more than anyone else but the way a great number of people did."

Caroline Eisenmann, a literary agent for Frances Goldin Literary Agency, and a Loup regular, told Gothamist, "It was an important professional space, a living room among friends, a place to take meetings and to celebrate and to recharge."

Even if Cafe Loup is actually gone this time, it will live forever in my heart and in my stupid Twitter bio.

(Truly though, I am in mourning.)

#café loup
#manhattan
#shuttering
#west village
Do you know the scoop? Comment below or Send us a Tip