Activists rallied outside the venerable White Horse Tavern on a rainy Thursday afternoon in a call to action against the historic bar's new landlord, as well as for the interior landmarking of the institution. The White Horse has been around since 1880, making it the second-oldest continuously-running bar in New York City. It's served as a notable hangout for cultural, political, and social movers and shakers, including Jane Jacobs, James Baldwin, and Dylan Thomas, among many others.

News broke earlier in March that the building, along with several others on the block, had been sold to Steve Croman, a landlord with a reputation for scare tactics, harassment, and pushing out tenants from rent-controlled apartments. Croman recently emerged from Rikers, after spending 8 months behind bars for tax and mortgage fraud, and was ordered to pay $8 million in restitution to former tenants. He apparently bought the properties on the Hudson Street block for $14 million, which includes the White Horse Tavern and the apartments upstairs, many of which are rent-stabilized.

The sale also brought news that restaurateur Eytan Sugarman, known for ritzy establishments such as midtown's Hunt & Fish Club and Southern Hospitality, signed a 15-year lease on the White Horse Tavern. In recent weeks, Sugarman has spoken both to the press and in front of a local community board meeting about not wanting to change anything about the place, save for amending the menu and making repairs as needed. A smattering of New Yorkers are nonetheless alarmed about what the future might hold for the bar, and are already eulogizing it.

Thursday afternoon's rally, organized by the Stop Steve Croman Coalition and featuring a cadre of Croman's current tenants, locals, and lawmakers, preceded (but wasn't explicitly connected to) an "Irish wake" for the White Horse.

Wasim Lone, the Director of Housing Services of the grassroots organization Good Old Lower East Side, kicked off the rally by speaking about previous cases where Croman allegedly harassed tenants with threats and deprivation of basic services—and that his reach extended to razing businesses, too. 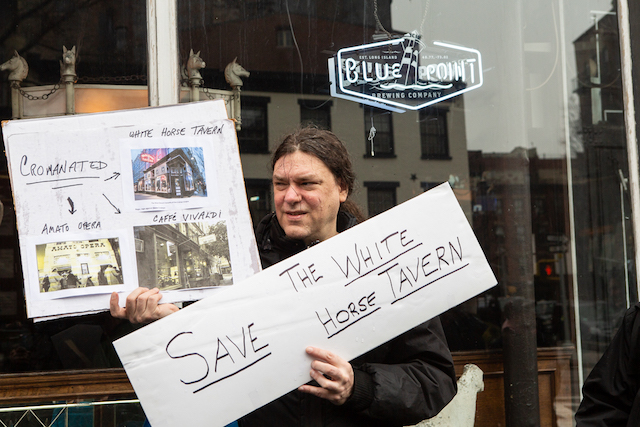 Cynthia Chaffee, the co-founder of the Coalition, is a 20-year tenant of Croman's on East 18th Street. She describes the experience as "hell," and claimed she developed asthma living in the building. “He’s so abusive, he torments his tenants," she tells Gothamist. "He doesn’t give heat, he doesn’t give hot water, he doesn’t give us our leases. You name it, he does it.” Chaffee said that she hasn't spoken to the tenants who live upstairs, but that she, as well as the organization, intend to reach out and help.

On Thursday, a group of local and state legislators, including Council Speaker Corey Johnson and Manhattan Borough President Gale Brewer, penned a letter to the Landmarks Preservation Chair bolstering the recent calls to landmark the bar's interior (the exterior has been a protected landmark for 50 years).

"How can a convicted felon, how can a notorious landlord, how can someone who seems to break the law as a process of doing business—how can he purchase this building and wreak havoc on more small business owners?" State Senator Brad Hoylman said at the rally, citing long-gone local businesses including Mitali East, Caffe Vivaldi, and Snackdragon, which eventually shuttered after Croman purchased their respective buildings. "We have a lot to be concerned about in Steve Croman and we need to use every legislative, regulatory, and every bit of protest power that we have to make certain that this landmark remains and it flourishes," he said. 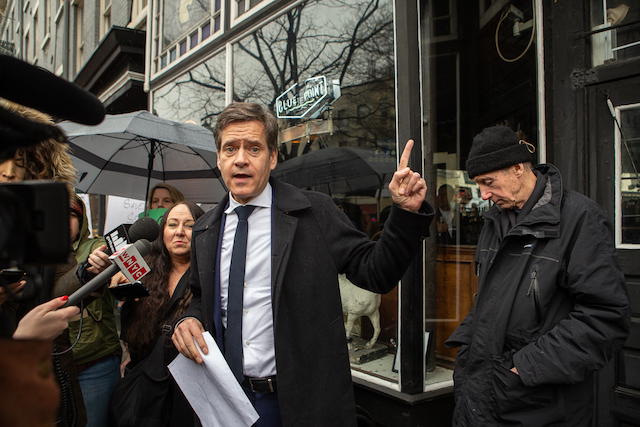 "All we have left of this history is attempts at it, it’s a hall of mirrors, and it’s disgusting," said New York City tour guide Charlie Walden at the rally. "At best this will become like Fraunces Tavern... a theme park impression of what history really was." Speaking to Gothamist, Walden cited the likes of Minetta Tavern, which now have extensive wait times and astronomically-priced burgers, that don't cater to neighborhood locals anymore. "[The White Horse] will likely become a $25 cheeseburger place that is beneath places where they hope famous people will live," he said.

An Irish wake, intended to celebrate the life and death of the White Horse, immediately followed the rally at the back of the bar. Peter Carlaftes, a regular at the bar since the mid-1970s who co-runs the indie press Three Rooms, and the organizer of the wake, ruminated on change in front of the crowd. "Why does this change?" he asked. "Why does this capitalistic society change so much quicker than the things that we need, like social justice...these guys get richer and that’s the way it is! So let’s just celebrate by doing what the Irish do and try to find the joy in every minute of we’re here right now. That’s what were going to do, and that’s it."

He then brought on the Irish-American poet Malachy McCourt, who spun yarns, sang traditional folk songs, and read poetry from the likes of W.B. Yeats and Dylan Thomas, including the latter's well-known "Do not go gentle into that good night" and "I see the boys of summer." McCourt, who is 87, told the rapt crowd about coming to the White Horse in 1953, and hanging out with the Clancy brothers. "Let's have a cheerful song," he said, before leading the pack in singing: "Look at the coffin, with golden handles / Isn't it grand, boys, to be bloody-well dead? Let's not have a sniffle, let's have a bloody-good cry."

While much of the crowd had convened to see McCourt read at the back, many locals posted up to swill drinks at the bar as they usually did. Carlaftes tells Gothamist that he intended for the "wake" to be a small gathering, but with more attention, it ballooned into a full-on event. "What we were doing isn’t really attached to anti-Croman or anti-Sugarman [rallying], the change is coming," he said of the wake. "And we were here to nod the hat to what we had here and what we still have in this moment." 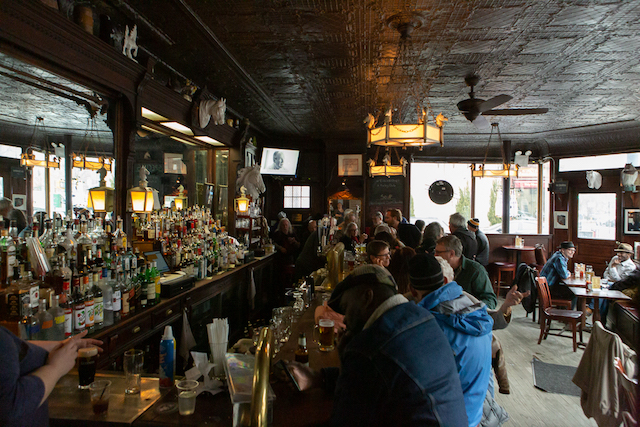 The prevailing mood among White Horse regulars on Thursday evening seemed to be that change was inevitable, and that it was more that it was too soon to tell what the imminent wave of new ownership might bring. "[They] will be starting to make ends meet, and what that process entails is not known at this point," Carlaftes said of the new guard. "I'm not sure what will happen, but in no way, shape, or form could it be this any longer. It's just not possible."

One barfly who lives in the neighborhood but declined to be identified tells Gothamist that much of the public outcry has been perpetuated by people who don't frequent the bar, and that misinformation has been rampant. "This is really two different stories," the person said. "This is the story of a landlord, who’s the worst landlord in the world according to his history, they say. Then there’s the story of a guy—yeah he’s a young guy, he’s a little slick—but I think he gets the mystique of where we are and why this place is unique. So I think we have to embrace that and not be so fearful." The regular added that it's a better alternative that the White Horse stays open than it becoming another vacant storefront.

"We know Croman paid a lot of money for these buildings and he’s sure to try to recoup that investment, fair or not fair," warned Harry Bubbins, of the Greenwich Village Society for Historic Preservation, at the rally. "He should know that we’ll be watching."