Welcome To WastED, The Trash-To-Table Restaurant Of Your Dreams The first sign that my dinner at wastED was going to be an exceptional, truly entertaining experience came with the bread, when my waitress poured the hot "wax" from my candle into a little dish of rosemary and sea salt, and told me to use it as a dip. The candle was made from beef tallow, or rendered beef fat, which is normally discarded in restaurants (and homes) everywhere, but turns out to make a not-bad bread spread, in addition to providing a pretty and romantic addition to the table.

Actually, that's not true. The first first sign that wastED would be something special came when I pulled my folded-brochure of a menu from its paper bag (pencil provided, in case you want to make notes) and read the amusingly frank descriptions of dishes using "second-class grains and seeds" "old dairy cow bresaola" and "mystery vegetables and peels." Dan Barber's two-week pop-up is dedicated to upcycling and repurposing the "trash" created at every stage of food production.

There's also a lengthy, informative glossary that explains exactly why and at which stage of the farm-to-table process the food which you are about to eat is usually discarded. Like everything about wastED, from the design and decor, to the astonishingly good food, to the concept as a whole, the long-read menu is clever, skillfully-executed, and clearly a labor of love.

Some basic facts about wastED: 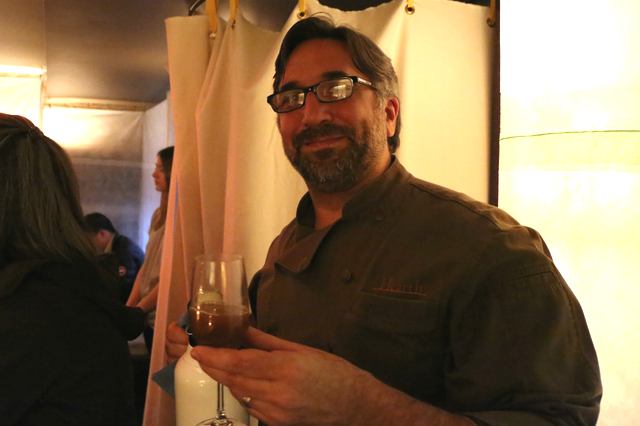 So all of that is interesting and fun and unique, which is not an easy trick to pull off these days, to do something genuinely new in the restaurant world. But what really sealed the deal in making wastED certain to be one of my favorite, most memorable meals of the year was the fact that food itself was so outstanding.

I ate six dishes, including Ansel's dessert (but not including all of that bread with tallow, nor the beefy Brodo Bomb), which is a little obscene but whatever. Everything was fist-rate, but standouts included the Dumpster Dive Vegetable Salad ("a selection of vegetable scraps, stalks, and outer leaves salvaged from the waste stream of a large-scale food processor") with pistachio, damaged storage apples and pears, and whipped chickpea water, which uses the liquid drained from a can of garbanzos; and the insanely good Pasta Trimmings (how they pulled off cooking these various-sized and -shaped bits of noodle so uniformly perfect is beyond me) with smoked fish head sauce, preserved monkfish tripe (so intense!), and pork cracklings.

I also enjoyed the charcuterie tray made from waste-fed pigs and served with reject carrot mustard and thin slices of pickled, off-grade sweet potatoes; and the full-on funky slab of Dog Food, a meatloaf made from those unsellable offal cuts that usually wind up in Fido's bowl, combined with meat from a past-its-prime dairy cow which is also often fed to our pets. True, if you didn't know the backstory on this dish in particular, you'd likely balk at shelling out $15 for a piece of ground... something. But it works in this context.

And that's really what wastED is all about, the entirety of the experience. There's no overt political statement here, beyond making the point that, as climate change effects food production, maybe we shouldn't be throwing away so much stuff that could be happily eaten. Plus, there is something satisfying about watching well-to-do Greenwich Villagers plop down a tidy sum to dine on what is, essentially, garbage. But if you're interested in food, and admire the crazy creativity that goes into turning the ugly and rejected into something lovely and wonderful--and you can spare about $75 a person for drinks and dinner, tax and tip—one of these wastED nights is an absolute must.

#blue hill
#quick bites
#upcycling
#wasted
#original
Do you know the scoop? Comment below or Send us a Tip
A new Gothamist is coming! We’ve moved comments over to our beta site. Click here to join the conversation and get a preview of our new website.