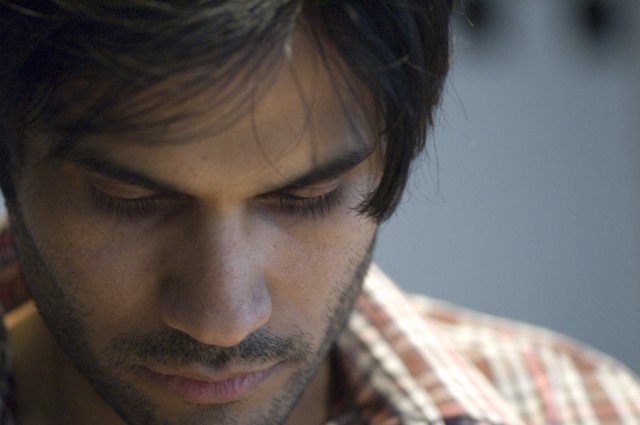 In his one-star review of Elettaria earlier this year, the Times's Frank Bruni described the atmosphere as “self-consciously adorable, with girly flourishes,” and “dollhouse elements.” Last week, in an article about gender roles and restaurants, Bruni reiterated: “The bound linen dinner menu evokes a diary and elements of the décor bring to mind adollhouse; I spotted more women than men.”

Now consider this tidbit from the New Yorker about Elettaria’s chef Akhtar Nawab:

Nawab, who sports an insouciant, Clooney-like scruff, is swarthily handsome, and diners, notably women, eagerly approach to shake his hand. (Blame it on the Zombie Punch, one of the house’s more lethal cocktails, but a recent diner had to admit, “He is pretty good-looking.”)

FYI, Nawab (above) also cooks. His eclectic menu, which sometimes draws on his mother’s home cooking, is definitely more dal than dolls, but it’s also entirely of itself—a garam masala pork rib appetizer easily out-BBQs the best BBQ pork ribs in the city. Mucho fuss over “gendered” restaurants and movie star looks might explain why Elettaria has been shy, if not downright loath, to promote their recently added, recession-minded lunch special on weekends.

Bottom line: $25 gets you two courses and a beer, glass of wine, or fancypants cocktail. Starters include sheep’s milk ricotta with pine nuts, thyme honey, and toast, and fried quail with pickled mango, bacon, and frisee. Main courses include curried pork wrapped in naan with raita, and homemade sausage with salad, pickled onions, and fried duck eggs. Nawab’s current favorite lunch pick is poori with potato-cauliflower cake and soft scrambled eggs, “when I was a kid, we used to wrap it all up in the bread and eat it like a sandwich."