Mexican eatery Citrico in Prospect Heights celebrates summer with some great deals on drinks throughout the month of July. Stop by from 5 p.m. to 8 p.m. Monday through Friday for $4 mezcal shots, with daily specials like $4 margaritas on Mondays and an all-night happy hour on Thursdays that includes $6 margaritas, $5 sangrías and micheladas, and $4 tequila and mezcal shots. While you're drinking your fill, you can also get dinner for $9.99 with special deals on any entree on the menu during the work week.

If you're dining in Spain, it's all about the Jamón Ibérico, thin slices of acorn-fed pork that's like prosciutto on steroids. Tavo in the West Village has begun a Monday night special celebrating the unique ham they're importing via Cinco Jotas. They'll be hand-slicing the Jamón Ibérico de Bellota ham (see above) and selling a portion for $15 each Monday evening throughout the summer. Update: Because of a recent fire, Tavo is closed until further notice.

Williamsburg restaurant Rider welcomes a new outdoor seating area with some happy hour specials beginning on July 5th. Park yourself at one of the chairs on North 6th Street for $1 sausages, $1 oysters, and $8 glasses of wine every weeknight beginning at 4 p.m. and running 'til 7 p.m. 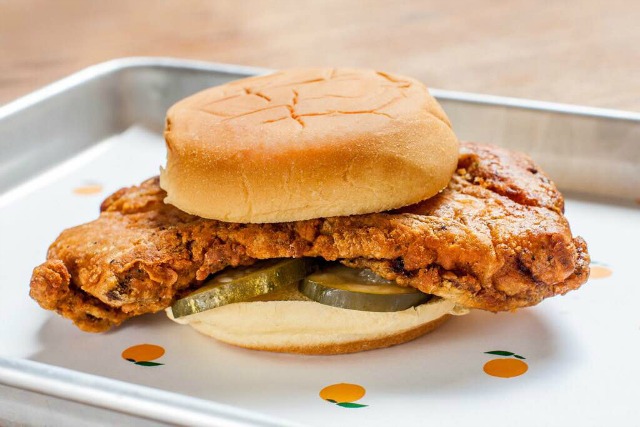 The new fuku in the Financial District finally opens for lunch service on Wednesday, July 5th. To mark the occasion the restaurant will be offering its spicy fried chicken sandwiches for just $5 from 11 a.m. to 9 p.m. on opening day. They've also announced a new partnership with Wylie Dufresne's fledgling donut operation Du's, selling green apple peanut butter, coconut kalamansi and yuzu peach flavors at this fuku locations for $3.50 a pop.

Elsewhere in Du's news, the donut shop will collaborate with its neighbor at Williamsburg's William Vale Hotel, Mr. Dips, for a special July 4th weekend-only creation. The Dippity Du Da ($7.50) is a raspberry crumble-topped vanilla cone sitting on a Du's Donut with milk glaze, blueberry & raspberry icing. Stop by anytime through Tuesday to sample the dessert for yourself.