The setting: The fourth Arby's in New York, which opened last week on a windswept block of East 23rd Street, joining a McDonald's, a Panera Bread, a Starbucks, a Chop't, and a Walgreens where the “Produce” section of the refrigerators is stocked with a wide selection of Vitamin Waters and Mountain Dews.

The mission: Try the limited edition Arby's venison sandwich and write about it.

Now, before you go and question my fast-food reviewing qualifications, let me admit that I haven't eaten fast food regularly in 15 years. However, I have had a pretty steady supply of venison these past few. My in-laws live upstate, and it's a fortuitous arrangement: they have a friend who hunts but doesn't eat the venison, and they get so much that they're more than happy to send my wife and I home from visits loaded down with steaks and roasts and stew meat. Even though it's been twice handed-off, the stuff we've been eating is about as close to the source as it gets, and about as sustainable.

No land has to be cleared to pasture deer; no wheat has to be grown to feed them; and they are overpopulated, so hunting them actually helps out our hobbled ecosystem. Deer can't be certified organic, because who knows whose grass they're eating, but no one's shooting them up with hormones and antibiotics. Their meat is lean from a lifetime spent prancing through forests and meadows. Free-range, eat your heart out.

Deer at a farm in upstate New York. (Highland Farm)

But because deer live their lives ungoverned and the practice of hunting for profit doesn't have the best track record around these parts, New York won't let you buy hunted venison. This limits the availability of the stuff to those who know a guy who know a guy. There are a handful of niche farms in the U.S. that raise deer for meat, including some upstate. But Arby's, like most restaurants in New York that sometimes carry venison, sources it from farms in New Zealand.

I don't remember ever eating Arby's as a kid, but it was around when I was growing up in Michigan. Founded outside of Youngstown, Ohio in 1964, the chain distinguished itself with Western décor and a menu centered around roast-beef sandwiches, as opposed to burgers. It was also more expensive than its competitors, which may have been a winning strategy for the company, but did not entice my parents who are, shall we say, frugal. It couldn't have helped either that I was a picky eater whose stomach for sliced meats started and ended at bologna. Still, I remember watching the commercials that showed cascading piles of pink meat and curly fries as an elementary schooler and finding it all impossibly sophisticated. Also, I recall marveling out the car window at the towering Arby's cowboy hat sign lined with little lights, one of a handful of pieces of old roadside Americana giving the strip malls on the outskirts of my town the look of a lesser Route 66. 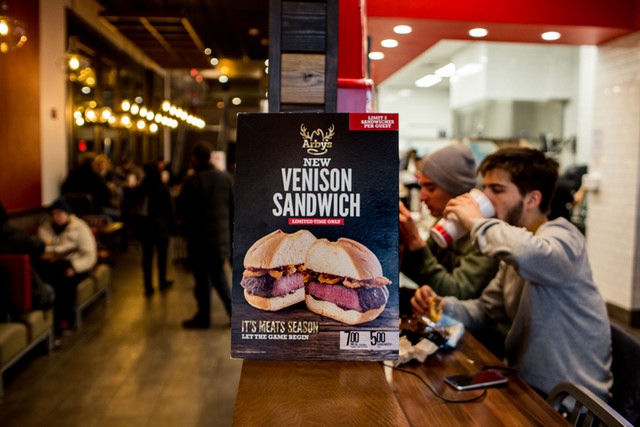 The ad photo is a little generous, but generally accurate. (Scott Heins/Gothamist)

A sign welcoming diners to the Flatiron District Arby's on Saturday advertised the venison sandwich with the tagline “IT'S MEATS SEASON/LET THE GAME BEGIN”. The company, now part-owned by Wendy's, first rolled out the sandwiches in limited runs last year during deer-hunting season at locations mostly in small towns, where eating venison is more of a thing. In Manhattan in March, there's no such tie-in, but that seems not to have stopped curious customers. During the afternoon on Saturday, the first day the sandwich was available, the line was only a few people long, but business was steady, and a cashier said the venison was the biggest seller of the day by far.

The inside of the place is a mash-up of McDonald's and New Brooklyn rustic, lit with Edison bulbs, candy-apple-red tall chairs pulled up to tables and counters made of reclaimed wood, walls lined with subway tiles and more strips of wood, a 10-foot-tall photo-illustration of one of the classic roadside Arby's signs, and silhouettes of livestock “burned” into wall panels. Two steps from the door, a black bell is bolted to the wall above the engraved message, “Delightful Experience?/Delicious Food?/RING the Bell!” Customers obliged with gusto every 3-5 minutes on their way out, prompting someone behind the counter to shout “Thank you!” each time.

“People love ringing a bell. How often do you get to do that?” my dining partner and photographer Scott Heins observed. A fellow Midwesterner and experienced Arby's eater, he tells me the bell is another of Arby's signatures.

Another thing I learned: the cutting edge of fast-food joint design today includes touch-screen drink dispensers, which provide you the option of lacing your drink with up to three fruity flavors, and medium sodas are now the size of your face. 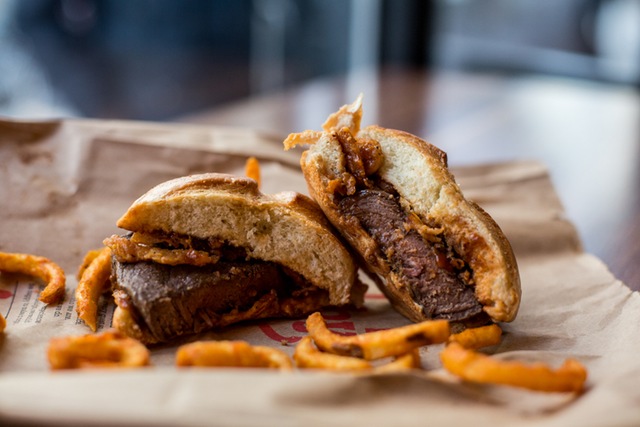 The sandwich of the hour. (Scott Heins/Gothamist)

Dr. Pepper and food in hand, I found a seat and got to work. The venison steak was smaller than the one pictured in the ads, not quite meeting the edges of the toasted white-bread bun. It was more tender than the venison steaks I'm used to, but still tougher than your typical burger or chicken sandwich, meaning it took a tight grip and a firm bite to avoid inadvertently pulling out the whole hunk of meat. This is not a dig: the way this venison came was physically easier to eat and better suited for a sandwich than the steaks I've had.

The Arby's steak comes topped with deep fried onions and an orange-red jelly of indeterminate composition. The sweetness of the toppings masked and mingled with the lingering musky quality of the venison, which was less pronounced than in the wild stuff, but still very much there. Cook venison for too long, and in a snap you've turned it into leather, which usually leaves me erring on the side of caution, making steaks that are essentially raw for the center third. But Arby's, in its industrial wisdom, has come up with a method that leaves just a bit of pink at the middle without leaving the rest a baseball glove. Take too long eating it, though, and the bun will get soggy.

Again, Scott summed it up: “If I cooked this sandwich for myself at home, I'd be happy.” 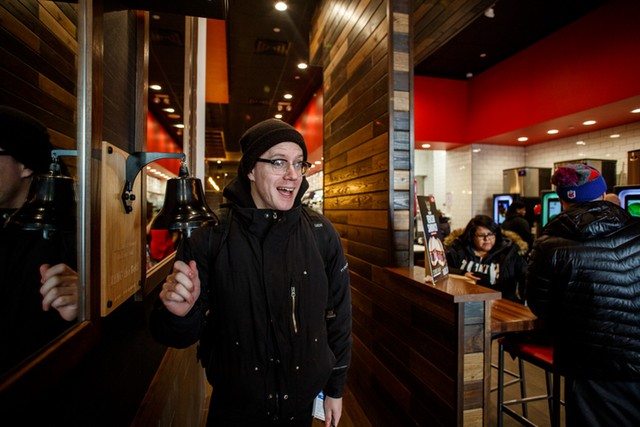 If you ring a bell in an Arby's and no one there says thank you, are you even alive? (Scott Heins/Gothamist)

I plowed through the rest of the curly fries, which conjured memories of the bowling alley snack bar in middle school, and tossed back the rest of my bucket of soda. I probably could have done without some of that—finished, I felt like there was a wad of cardboard in my gut. Beating back my carb-and-additive hangover, I got up, tossed my trash, and headed in the direction of the door with a sense of purpose. This would not be an anonymous encounter with a chain restaurant. I would not be an anonymous $16 on the daily ledger. Having flagged down Scott from outside, I reached for the bell and, after realizing the rope pulled side-to-side and not straight down, gave it two resounding tugs.

Nobody said thank you.

The Flatiron District Arby's opened last week at 32 East 23rd Street, between Broadway and Park Avenue South. The restaurant ran out of the venison sandwich on Sunday afternoon, according to an employee.