We Tried The Food At The New 'Clean' Chinese Restaurant Lucky Lee's...

A new "clean" American Chinese restaurant in Greenwich Village became a lightning rod for controversy this week after people decried its white owners' marketing strategy as racist and culturally appropriative. Nutritionist Arielle Haspel opened Lucky Lee's for lunch on Monday, initially positioning her dishes as alternatives to the "oily," "salty" cuisine that, as she put it in a now-deleted Instagram post, makes people "feel bloated and icky the next day."

In a NY Times interview that followed the kerfuffle, Hapsel appeared contrite, saying, "We have been listening and learning, and we have been making changes and we will continue. Shame on us for not being smarter about cultural sensitivities."

The Times notes, "[Haspel] decided against using a decal that said 'Wok in, Take Out' that she planned to put on the window." However, Gothamist editor Elizabeth Kim did spot a sign with that phrase in the restaurant's window—and did a double take—over the weekend.

The language Haspel initially deployed to describe her vision for the restaurant—and the language used in the Instagram below in which she attempted to defend her intentions against criticism—sparked a conversation about cultural erasure, long-standing stereotypes about Chinese restaurants, and the manipulative nature of the food-wellness industry. "Every restaurant has the right to tout the positives of its food. We plan to continue communicating that our food is made with high quality ingredients and techniques that are intended to make you feel great," the Lucky Lee's post states.

Whether or not that makes any difference in the larger conversation about the restaurant's disastrous marketing launch, after reading all about this place all week, I felt like we needed to know first-hand: what was the food like?

The other day we received some negative comments on an Instagram post. Some of your reactions made it clear to us that there are cultural sensitivities related to our Lucky Lee’s concept. We promise you to always listen and reflect accordingly. A number of comments have stated that by saying our Chinese food is made with 'clean' cooking techniques and it makes you feel great that we are commenting negatively on all Chinese food. When we talk about our food, we are not talking about other restaurants, we are only talking about Lucky Lee's. Chinese cuisine is incredibly diverse and comes in many different flavors (usually delicious in our opinion) and health benefits. Every restaurant has the right to tout the positives of its food. We plan to continue communicating that our food is made with high quality ingredients and techniques that are intended to make you feel great. Chef/owner, Arielle's husband's name is Lee and his life-long love of Chinese food was inspiration for the restaurant. The name Lucky Lee's reflects the story of how the recipes were conceived. We also received negative comments related to being owners of a Chinese restaurant but not being Chinese. Owners Arielle and Lee are both Jewish-American New Yorkers, born and raised. Similar to many other Jewish New Yorkers' diets, bagels, pastrami sandwiches and yes, American Chinese food, were big and very happy parts of their childhoods. New York is the ultimate melting pot and Lucky Lee's is another example of two cultures coming together. To us, this is a good thing. We love American Chinese food and at Lucky Lee's it is our intention to celebrate it everyday and serve great food. #luckyleesnyc

I took a field trip with Gothamist co-founder Jen Chung to Lucky Lee's on Wednesday (the restaurant is currently only open for lunch between noon and 3 p.m.) to check out the hullabaloo. The inside of the fast/casual place is perfectly-tailored for the Instagram crowd it is seemingly aiming for: there is a striking wall filled with palm-tree wallpaper; high ceilings; bamboo lights; excellent lighting; and a wall decorated with Asian-style bowls.

The menu is only available right now on TV screens above the ordering area; it isn't huge, and includes six "favorite combinations," five small bites, five greenmarket veggies, a couple rice and noodle dishes, and a sesame chocolate chip cookie.

There was also a big disclaimer on the menu which stated: "This entire menu is gluten-free, dairy-free, wheat-free, corn-free, peanut cashew & pistachio-free. Ingredients may be made in facilities that processes gluten, dairy, wheat, nuts. We use non-GMO oil & never refined sugar, MSG or food coloring." With all of those caveats, it made me wonder whether they should also be listing what exactly was allowed to be in the food.

Haspel was there on-site, decked out in a "Get Lucky" T-shirt and "LUCK" hat, greeting customers and helping to explain the menu (one woman had a lot of questions about the quality of oil they were using). We attempted to talk to her, but were quickly shut down by her sister, who is handling her publicity: "She's not giving interviews right now. She's being present for her customers." 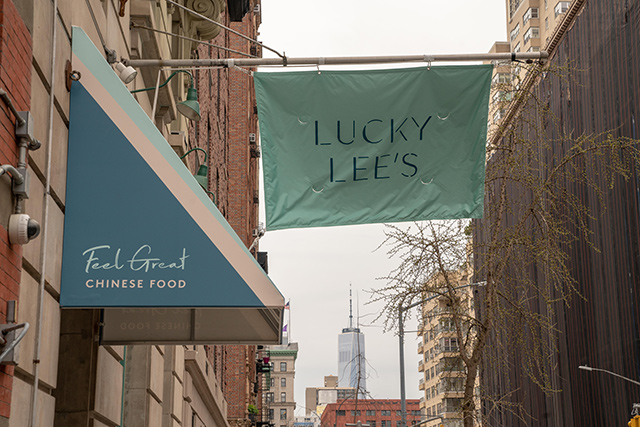 We should note that this was the first week the restaurant was open, and restaurants often need some time to get things in order. Opening a new restaurant in the city is really hard, even when you don't come out of the gate stumbling over your own marketing copy—an estimated 60 percent of restaurants fail in NYC during their first year.

Having said that...the assortment of dishes we tried were not promising. The General Tso's Chicken was tough and overcooked, to the point of being cardboard-like in consistency, though the string beans on the side were fine. The Kung Pao Mushrooms was marginally better. The Grass-Fed Beef & Broccoli had one thing going for it: the broccoli was actually quite good (the beef, however, was tougher than it should have been).

The worst-tasting dishes, though, were two of the most foundational elements of any Chinese meal: the rice and the Veggie Dumplings. The rice was remarkably bad, simultaneously undercooked and over-congealed into a gruel that I imagine even Oliver Twist would reject, while dumplings had an unmemorable filling and a wrapper that was mealy and gritty, much like sandpaper, and was essentially inedible.

This does not bode well, because the dumplings are one of the major items on the menu, as the owners wrote on Yelp: "Lee and Arielle, husband and wife, busy New Yorkers and parents, love New York City American-Chinese takeout. Lee is obsessed with dumplings and Kung Pao Chicken, so Arielle developed his favorite dishes using home ingredients and special cooking techniques. "

I asked Chung, who also found the meal lacking (she accidentally took a second bite of rice and then exclaimed, "What am I doing?!") what she thought about the controversy.

"It's an odd experience, walking into this beautiful, place—I mean, being on University Place between 10th and 11th Streets is not cheap—that's proclaiming 'clean' and #feelgreatchinese and knowing that when my grandparents came to this country and opened a Chinese restaurant, because that was one of the few businesses they could go into as immigrants," Chung said. "It feels like a lot of privilege to assume this take on Chinese food would taste 'better' than all other Chinese food."

"I think her approach would have been better as, 'Hey, I'm a nutritionist, I see so many people with dietary issues now. I love Chinese food and came up with these ways for my clients to enjoy it... and I wanted to share it with you now,'" Chung added. "I just have a lot of questions: Did she study Chinese cuisine? Or work with Chinese chefs or go to China to better understand the roots of the cuisine she loved? I wouldn't claim to make 'Better tasting Italian food' without going to Italy to actually understand it. Right now, there's no acknowledgement that she's done any work to understand the culture she says so interested in."