We Ordered (Almost) Everything On The Menu At Tim Ho Wan, The World's Cheapest Michelin Starred Restaurant Tim Ho Wan, the "world's cheapest Michelin restaurant," soft-opened in mid-December, drawing daily lines that wrapped around the block despite the frigid temperature. The lines have subsided (slightly) now that the restaurant's officially open, but they're still packing in diners for lunch and dinner who are drawn by the cheap prices and allure of steamers stacked with siu mai and bowls of sticky rice.

Dishes aren't carted around the room like some other dim sum spots; instead, diners order a la carte off paper menus in as many rounds as they'd like. In total, there are 29 different dishes one could order. So, naturally, that's what we tried to do, ordering and receiving all but five menu items (three of which were very similar to other items on the menu, two of which the restaurant didn't have available that day).

While ordering that much food sounds financially aggressive, you could do the same for under $150. 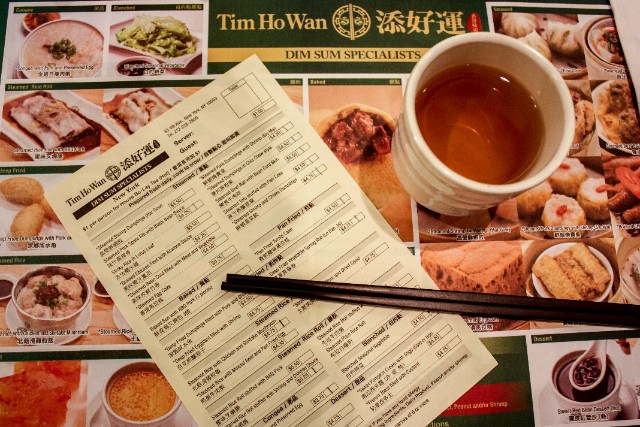 Next to us was Alice Chin, who was raised in Hong Kong and moved to the United States at 19. Whenever she goes home, she always stops by Tim Ho Wan to eat. "I make it my last stop before I fly," she told us. She found the Manhattan Tim Ho Wan to be about 80% of what she thinks of the Chinese version, saying the dishes here are less salty and oily than their counterparts. She thought they got the turnip cakes just right, though.

Below (presented in no particular order), our favorite dishes after sampling Tim Ho Wan's extensive—and mostly excellent—roster of dim sum. 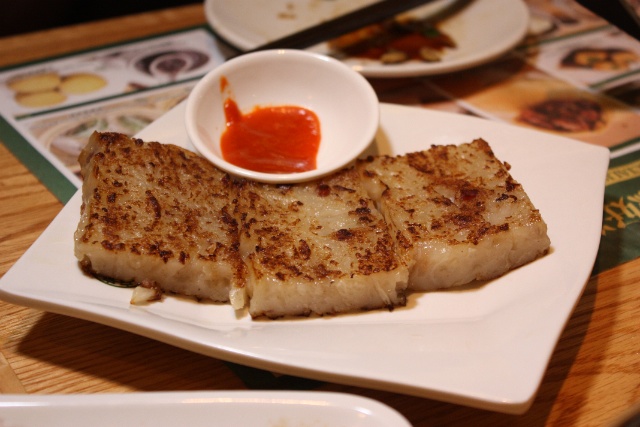 PAN FRIED TURNIP CAKE, $4.50 We have to agree with Alice, here, that the turnip cakes are a must-order if you're dining here. They're super buttery and decadent, with a nice crunchy fried exterior and a soft interior texture. They're fortified with both dried shrimp and Chinese sausage, lending it additional savoriness and just a tiny bit of fishy goodness. The bright red hot sauce on the side is quite a bit hotter than something like sriracha, and it does a great job of balancing out all that fat. 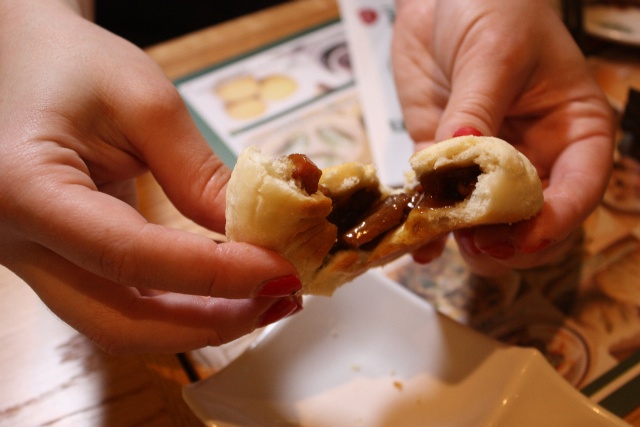 BAKED BUN WITH BBQ PORK, $4.95 I'd bet most casual dim sum eaters are more familiar with steamed bao, the fluffy, sticky bun encasing a rich pork filling. Tim Ho Wan instead serves baked buns, with almost a biscuit-like texture and ever-so-slightly buttery. The dough to filling ratio is also a little more even, whereas with steamed bao, it might be a little heavier in the bready part. It's a signature dish to the restaurant, and they describe the texture as "croissant flakiness."

The Cantonese specialty is a hallmark of the dim sum experience. The sweet, hoisin-based sauce is a delicious foil to the roasted pork. You'll be fighting over the three that come to an order here. 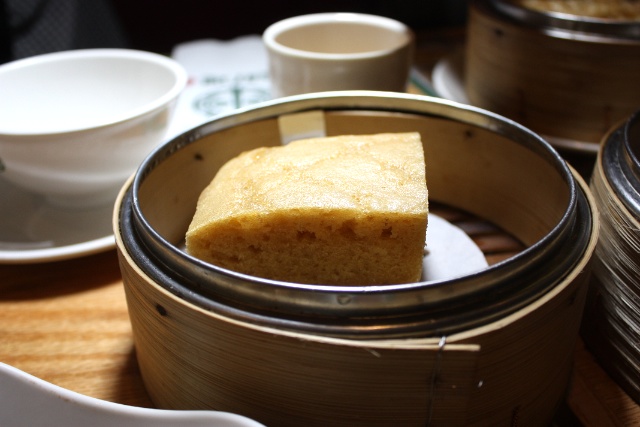 STEAMED EGG CAKE, $4.25 If this could be my birthday cake forever and ever, I'd be very happy with that decision. Light, fluffy and sweet (but not too sweet), this eggy cake seems almost dessert-like. It's like the best bread basket ever: you know you should "save room," but it's too delicious to stop eating. 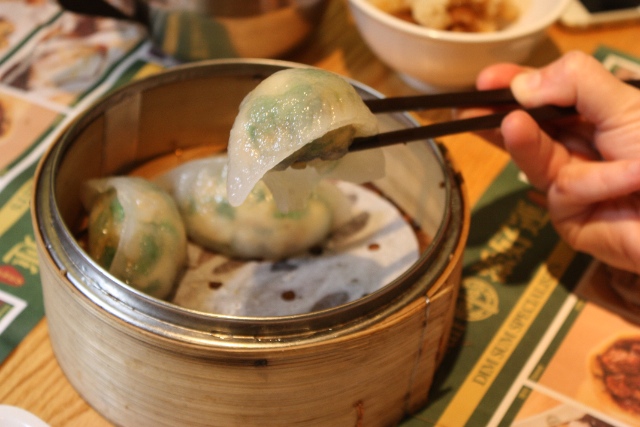 SHRIMP AND CHIVE DUMPLING Tim Ho Wan really excels at making dumpling skins and other wrappers like steamed rice rolls. The translucent skins let you peek inside before you even pick up a dumpling—and be forewarned that when you do grab them with chopsticks, they're so delicate they may tear. Pick any of the dumplings and you'll be happy, but we liked the crunchy shrimp and the bold, fresh oniony flavor of these powerful purses. 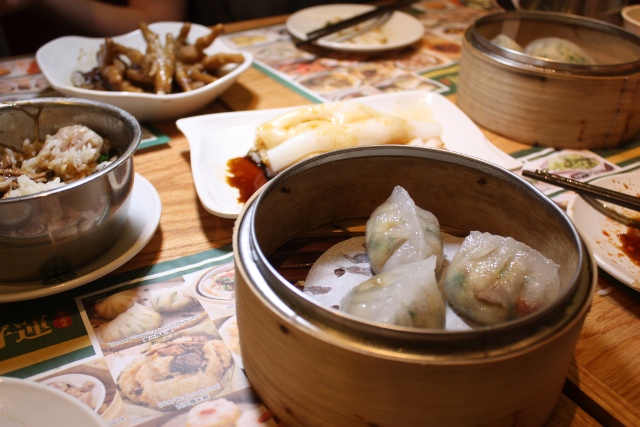 STEAMED DUMPLINGS IN CHIU CHOW STYLE, $4.50 Again, hard to go wrong with a dumpling, but these win for being one of the few completely vegetarian items on the menu. Inside the delicate wrapper is a super crunchy filling made from jicama and chives. For the uninitiated, jicama is the juicy, nutty root of the pachyrhizus erosus vine, often described as a savory apple.

One of the other vegetarian items, the restaurant's signature Deep Fried Vegetable Spring Roll, was not available the afternoon we visited. 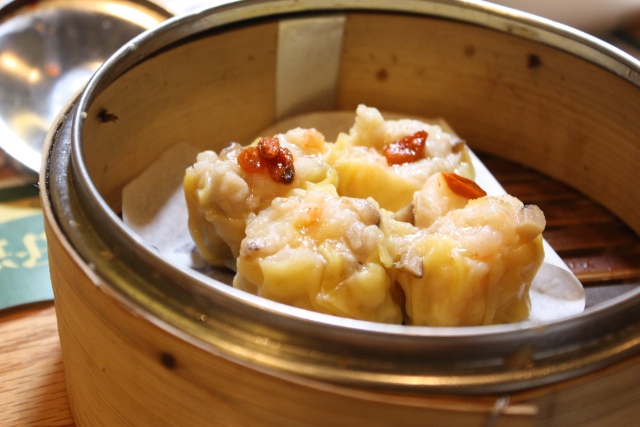 SIU MAI, $4.50 If you've brought someone in your party who's a novice at dim sum, these are a go-to order. There's nothing not to like about a pork and shrimp meatball stuffed into that characteristic bright yellow wrapper. Several trays of these would easily go down without a fight. And for anyone who's curious: that's a red date perched on top. 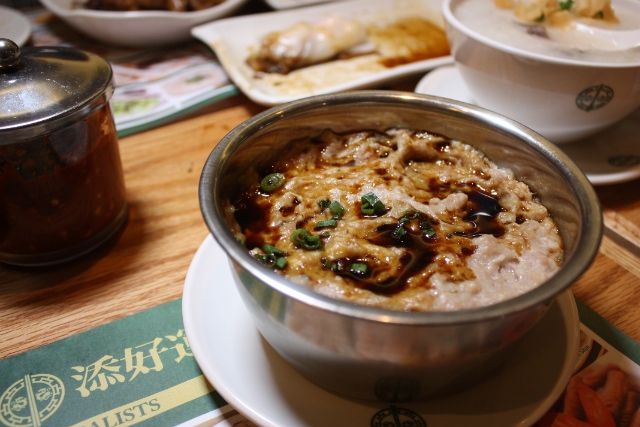 STEAMED RICE WITH PORK AND DRIED SQUID, $4.75 My notes on this dish read: "So comforting you want to stick your face in it." A paste of ground pork and strips of squid hides a bowl of steamed white rice. It's a simple dish (probably deceptively so, as with so many things here) that's one of the more filling options on the menu along with the also excellent Sticky Rice in Lotus Leaf and the other steamed rice-based dishes, like the Chicken and Shiitake Mushroom version. 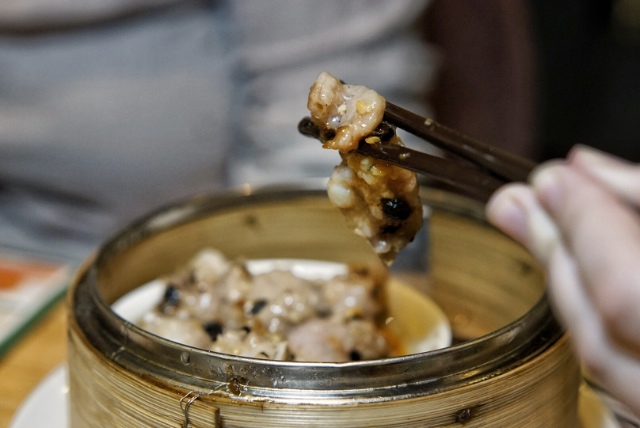 STEAMED PORK SPARE RIB WITH BLACK BEAN SAUCE, $4.25 These succulent pork nibbles may not be the most beautiful, but they more than make up for that in the flavor department. Chewy bits of pork rib cut into bite-sized pieces (there are bones in there, chew carefully) come swimming in a gravy-like black bean sauce (douchi) made from fermented soy beans and will inevitably drip all over your chin. Like chicken feet, there's no dainty way to gnaw the fatty meat and deposit the bone on your plate, but everyone else at the table's likely doing the same thing. Safety in numbers. 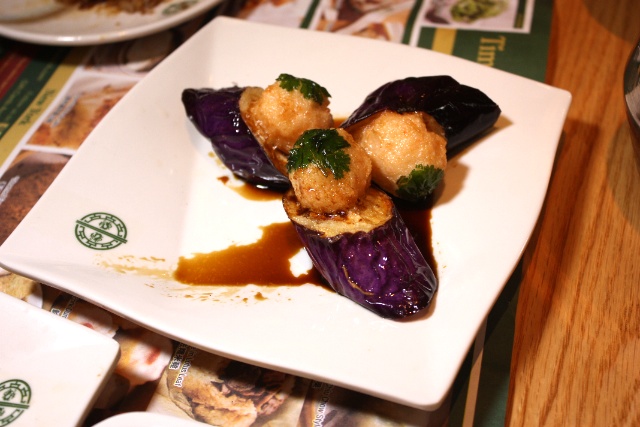 DEEP FRIED EGGPLANT WITH SHRIMP, $4.75 Though the dumplings have their own unique beauty, this dish is a real stunner. The bright purple of the eggplant, the dainty shrimp balls; it's so lovely you almost don't want to eat it. But do (eat it). The deep fryer brings out the eggplant's natural softness and the shrimp ball on top has a more solid texture for variation. It has a lovely, delicate flavor and it's remarkably not greasy for something that's been bubbling away in oil. 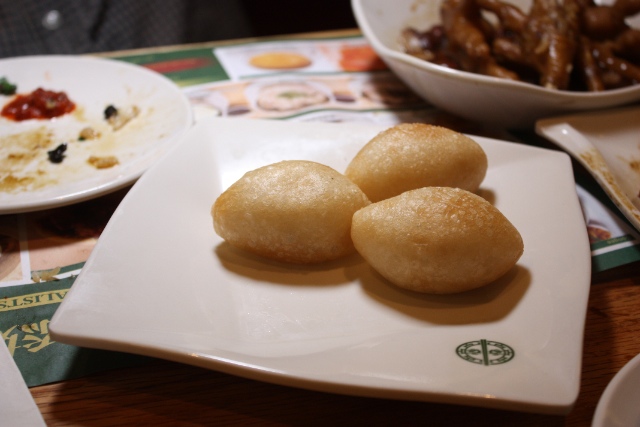 DEEP FRIED DUMPLINGS WITH PORK AND SHRIMP, $4.50 Nobody at the table was particularly jazzed about ordering these dumplings. On paper, they sound pretty basic, and when they arrived, their exteriors didn't seem to tell a different story. Don't be fooled. Like all the things at Tim Ho Wan, it may look simple, but it belies the complex techniques used to make these hand-made dumplings.

The dough's on the sweeter side here, soft and fluffy. The meaty filling adds savoriness and more moisture. Again, for a dish with the words "deep fried" and "pork" it's not at all greasy as the name might suggest. They're really masters of the fryer. 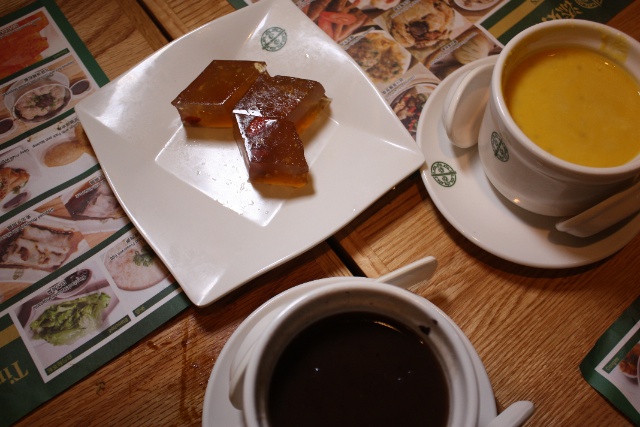 The orange bowl on the right (Nell Casey/Gothamist)

SWEET PUMPKIN CREAM WITH SAGO, $4.25 Of the four desserts on offer, this sweet crock of bright orange liquid was my favorite. Stir it around to make sure you get lots of sago, little pearls of tropical palm stem, in each bite. We ordered it cold, but I imagine hot it would taste like a delicious pumpkin soup.

The Sweet Osmanthus Jelly was great, too, like really fancy Jell-O.

#dim sum
#dumplings
#tim ho wan
#original
Do you know the scoop? Comment below or Send us a Tip