So there is this New York City artisan popcorn purveyor called Populence—their product will set you back more than Orville Redenbacher and a few shakes of garlic powder... but on the other hand: raspberry popcorn. Recently we were asked if we wanted to try their newest offering: wine-infused popcorn, which they offered to send along with Kim Crawford wine (the wine producer who collaborated with them on this snack). Before the popcorn arrived, these were the preliminary reactions from the staff, taken verbatim from an email thread: 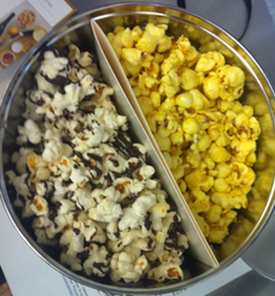 This afternoon the package arrived: one small tin of popcorn, and two bottles of wine. Everyone flocked to the office Silver Table (YOLO), gathered around and stared down into the tin, which was split into two sections: Pinot Noir Drizzle and Sauvignon Blanc Lemon. "Do we pour the wine into it?" one coworker asked. But with the question still hanging in the air, we all just mimicked our drinking styles and shoved as much wine-infused popcorn into our mouths as possible. Afterwards, we spoke freely about our experience as we awaited the buzz that never arrived:

It's true, the popcorn didn't really have the wine taste that we sickly craved, but it was good. Because it's popcorn! We also didn't pair it with the wines that were sent, because it was like 3 p.m. and we're professionals, and also wine-pairing just seems like a made up thing. Everything tastes good with whatever wine you have it with. Including this popcorn probably, which will be available starting this Friday (their 1-gallon tins cost $35, but smaller samplers cost $8).