I'd never given much thought to spaghetti's lack of portability until last night, when I was introduced to a curious new pasta delivery method: the cone. Spaghetti Incident, which began boiling up tasty plates of pasta in May, has tackled a heretofore under-appreciated problem, namely that eating many strand varieties of noodles involves finding a place on which to rest one's plate or bowl, whether that be sitting at a restaurant or hunched over your legs while perched on the curb (don't judge me). The cone makes it possible to stand (or sit) in a dignified manner while twirling a fork around some fresh bucatini; in fact, it might even make that process easier than plate deployment.

The sturdy but lightweight cones are easy to hold in one hand with a utensil in the other and come with lids for sealing if you're traveling to a different location to stuff your face. It'd probably be possible to eat while walking, too, and perhaps less perilous than texting while walking provided the fork can find your mouth without your eyes glued to the utensil. Heavier toppings had a tendency to slip to the cone's pinnacle but it was easy enough to give everything a stir and recombine all the ingredients. The trouble comes when you need to put the cone down for a moment, as most sidewalks aren't equipped with spaghetti cone holders (yet!). 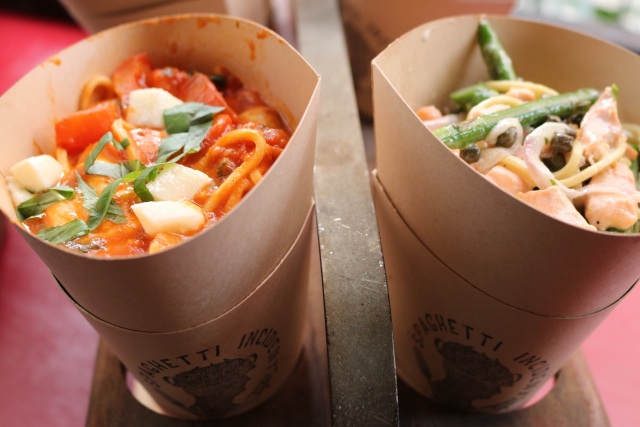 Chef Emanuele Attala was in high spirits during last night's press preview, jovially shouting over the din as new flavors and shapes arrived steaming at the special cone holder set up at the bar. Among those were a classic Ragu Bolognese ($9) with ground beef and tomatoes, a creamy Carbonara ($11) with nubs of fatty pancetta and my favorite, the Bucatini Trevigiana ($10), which used a light cream sauce to tie together pancetta, pine nuts and shredded radicchio. The restaurant also puts salads and their saffron rice balls in the cones, too.

If you're thinking this is all a bit silly you're both somewhat correct and without mirth in your life, I can only assume. It reminded me a lot of a book my piano teacher kept in her house that celebrated 101 Unuseless Japanese Inventions, like a tissues dispenser that attaches to your head (perfect for allergy season!) and a portable stool that enables the user to squeeze into tight spots on the subway. Do we need these conveniences? Probably not. But I'm pleased we live in a world where we can get them, if the craving strikes.