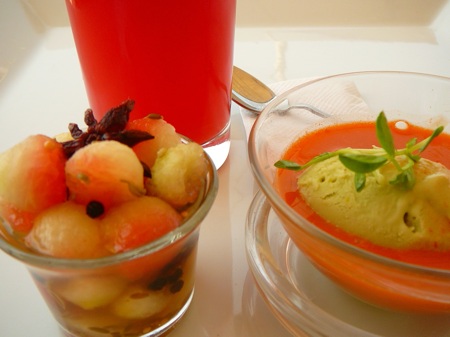 A recent op-ed in the New York Times explained the limits of "food miles," the concept that one's dinner plate should be measured via the amount of carbon dioxide emissions (and other pollution) produced by the modes of transportation required to literally bring home the bacon. A study done at Lincoln University in New Zealand indicates that other variables complicate the equations of food production and transport, and that emissions calculations aren't necessarily so straightforward. On the flip side of this debate are "localvores" like Barbara Kingsolver, who recently explained her position in an interview:

We don't have the luxury of forgetting indefinitely because this is not a sustainable proposition. By the time my kids are my age, they're going to look back and say, "You did what with the last drop of fossil fuels? You pushed a watermelon from Chile to your door so that you could eat it out of season? What were you thinking?"

Moreover, in Animal, Vegetable, Miracle, Kingsolver's husband Steven L. Hopp explains his particular gripe with watermelon: they're heavy, and mostly water. The environmental cost of transporting of watermelons from South America to C-Town bins, he explains, is especially inane when it comes to the fact that they're 92% water by weight. Of course, people are 61.8% water by weight, so perhaps a little quid pro quo is called for here.

Watermelon deserves a second act in the kitchen. Almost the entire fruit can be eaten; most varieties of the plant produce perfectly edible seeds. On the fine dining tip, Thomas Keller cooked some R&D watermelon sous vide a few years ago, changing its texture and taste; Alain Ducasse's NY chef de cuisine Tony Esnault recommends a light saute for the fruit, served with Chatham Cod. Pickled watermelon rind works well with pork- Zak Pelaccio famously paired it with pork belly at Fatty Crab, and it's still on the menu.

Sadly for us all, the idea of food miles has produced an equally unwitting and unlikely poster boy for poor ecological stewardship in the form of the comedian Gallagher, sledgehammer scourge of so many late night cable comedy specials of yore. That guy killed a lot of melons for sure. Regardless of one's personal stance on food miles it's almost always best to eat, and not smash, your food. Watermelon is in season now, and a lot of what's available was grown domestically. Make the most of it.

Combine all ingredients except watermelon rind in a non-reactive saucepan and boil for four minutes; put watermelon in a glass or plastic, heatproof container. Pour pickling liquid over watermelon and cover with plastic wrap. Refrigerate for at least a day before using.

Watermelon Gazpacho with Avocado Gelato
Avocado Gelato (recipe courtesy Epicurious.com); use a little less sugar than what the recipe calls for.

Blend all ingredients, adding olive oil, cilantro; seasonings last and to taste. Strain through chinois for smoother soup. Chill. To serve, place a quenelle of avocado gelato in center of bowl and ladle soup around. Garnished here with pea shoots.

Blend ingredients. Strain through chinois and serve over ice.