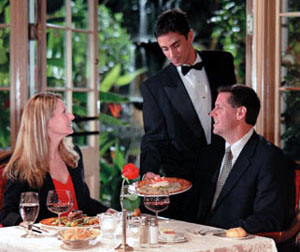 A waiter who turned his service industry lemons into publishing lemonade with his blog Waiter Rant has unmasked himself for the Post today, just in time for the release of his tell-all book. After years of anonymous venting about his miserable experiences serving swells at an unspecified restaurant in “the city's affluent suburbs,” Steve Dublanica has outed himself as the man who “prefers more elegant methods of revenge" than spitting in diners’ food – though he assures the Post this does happen often enough.

Dublanica reveals that "it's gotten to the point where I can tell how much money I'm going to make off a customer within 10 seconds of meeting them." And should he be dissatisfied with the gratuity, the waiter's wrath will get you barred from the restaurant permanently: "If you never get the table you want at your favorite restaurant . . . someone at the restaurant doesn't like you." Dublanica’s former restaurant, incidentally, has been identified by Grub Street as the Lanterna Tuscan Bistro in Nyack, New York.

And Dublanica isn’t alone in ranting to the Post today; as a companion piece the tabloid gets other anonymous servers to dish about their horror stories. These include being spit on (“I was too shocked and covered in phlegm to do anything"), being sexually harassed in the walk-in (“He actually started to unbutton his pants!”) and, in lieu of cash, being tipped with Xanax and cocaine ("They seem to think that if you're in the service industry, you're a drug addict by default!")

#book
#horror
#nightmare
#rant
#servers
#stories
#waiters
Do you know the scoop? Comment below or Send us a Tip