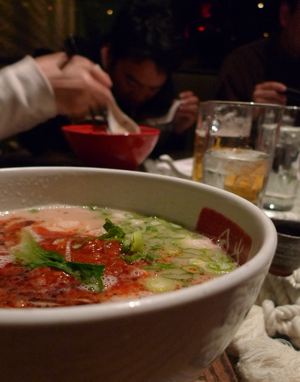 Everyone is going apeshit over soup. Even Restaurant Girl is clamoring for chowder’s moment. Earlier this week she reviewed Bussaco, a new Park Slope spot: "Eating the crab chowder at Bussaco makes me wonder why chowder isn't more popular," she writes. "Was there a chowder trend? Did I miss it? Why don't we have one now?" Crab chowder with “Old Bay puffs" is $14 at Bussaco (dinner only).

Elsewhere, Republic has just sent out a press release touting four more affordable soups, which range from Corn-Seaweed ($4), to Vietnamese Chicken ($8). And finally, at Al Di La in Park Slope, which started offering lunch service Thursday, a Northern Italian-inspired bowl of duck, kale, and squash soup topped with Parmesan croutons goes for $10. Expect the soup at Al Di La to change daily; the revolution will not be reheated in a steam table.

#al di la
#bisque
#Bussaco
#chowder
#eton
#ippudo
#pamplona
#ramen
#republic
Do you know the scoop? Comment below or Send us a Tip
A new Gothamist is coming! We’ve moved comments over to our beta site. Click here to join the conversation and get a preview of our new website.