Visiting Chef Will Not Braise our Squirrels 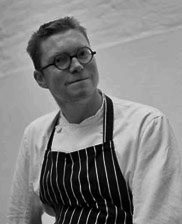 Cooking last night at The Spotted Pig for a sold-out crowd is visiting English chef Fergus Henderson, author of the newly released Beyond Nose to Tail, a sort of sequel cookbook. Spotted Pig chef April Bloomfield worked side-by-side with Henderson, who is best probably best known for his offal-centric food at St. John, his London restaurant, but is also considered to be a renegade, iconoclast cook: a chef’s chef.

At a book party on Monday night, we asked Henderson about the menu he’d been planning, specifically if he and co-author pastry chef Justin Piers Gellatly had managed to get any unusual or kidney shaped ingredients through JFK customs. After all, St. John just launched its first commercial product last month with something called “Unctuous Potential,” a collagen-heavy reduction of pig’s trotters, Madeira, vegetables, herbs, and chicken stock. “I didn’t bring anything. I have complete faith in your ingredients,” stated Henderson, adding that pig’s head and feet would likely figure into the menu. We asked the chef if he’d ever grill a local squirrel. “Well, there’s a braised squirrel recipe in my new book,” he said, “with dried cepes and watercress. They’re considered vermin after the end of the hunting season in England when they’re plentiful, but vermin isn’t necessarily a good menu word.” Not knowing for sure (it's around 70-90%, given all outer boroughs dining experiences), we asked how squirrel tastes. “It’s delicious,” said the chef. “With the mushrooms and cress, it’s poetic, like the treetops and greenery of the squirrel’s habitat.”

So would he ever cook a native NYC squirrel? “I don’t think so,” Henderson said, signing a copy of his book. “I don’t think I’d be too keen on that.”