Yesterday, American patriot Sarah Palin appeared at CPAC, the annual conservative pow-wow (no leggings or dressy shorts, please). And, as expected, she brought down the house with her folksy blend of 'Obama is terrible, Obama probably isn't American, and Obama is a liar.' But don't worry: she also made sure to mock Mayor Bloomberg.

Last week, Palin welcomed news that Bloomberg's attempt to ban the sale of sugary drinks over 16 ounces (at certain establishments) had been blocked. So at CPAC, she paused to reveal a Big Gulp from the lectern and drank from it, "Bloomberg is not around, our Big Gulps are safe. We're cool. Shoot, it’s just pop with low-cal ice-cubes in it." 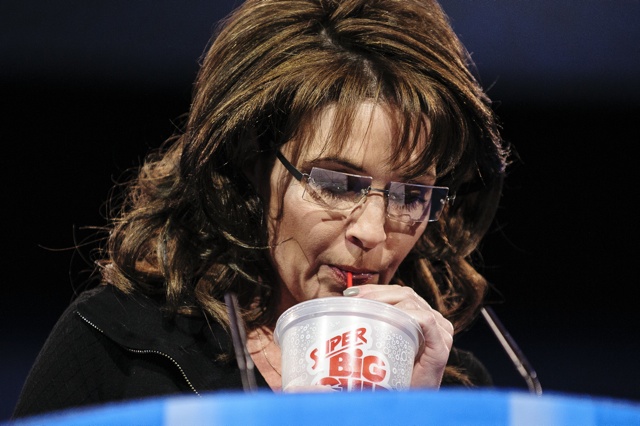 And right before the Big Gulp moment, she discussed gun ownership, "You should have seen what Todd got me for Christmas. Well, it wasn’t that exciting. It was a metal rack, case for hunting rifles to put on the back of a four-wheeler. Then though, I had to get something for him to put in the gun case, right. So, this go around, he’s got the rifle, I got the rack." Watch the boob-and-pop moments here:

Of course, the weird thing of Bloomberg's soda ban is that Big Gulps and 7-Eleven would have been exempt from the ban. But why should Palin know anything about policy? Anyway, Bloomberg is actually pretty libertarian about the soda stuff—last year he said, "If you want to kill yourself, I guess you have a right to do it."

#big gulp
#cpac
#mayor bloomberg
#sarah palin
#soda ban
Do you know the scoop? Comment below or Send us a Tip