The annual, oft controversial, San Gennaro festival kicked off yesterday with the tenth annual Cannoli Eating Contest. And while the winner didn't come close to beating last year's insane record nobody is complaining: many, many cannolis were still eaten in six minutes. There was even a tie-breaker! 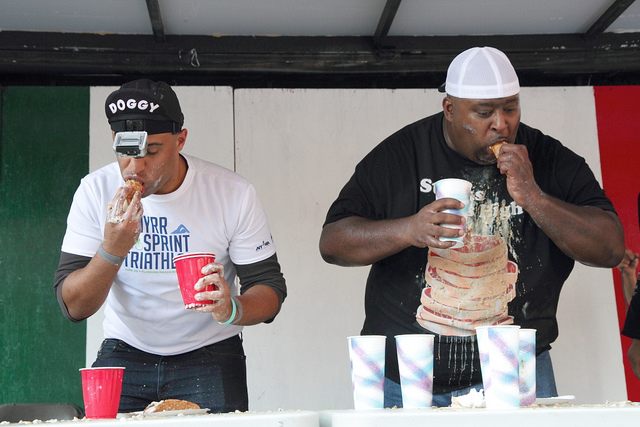 In the end the whole Major League Eating event came down to a tie breaker betwen Yasir Salem and Eric "Bad Lands" Booker in which each had to eat two cannolis as quickly as possible, leading to a swift victory for Booker who downed a total of 21 cannolis (and apparently was still hungry afterwards). Not quite the 32 that Patrick Bertoletti ate last year, but still!

There was no prize for eating all those sweets from La Bella Ferrara at 108 Mulberry Street. No prize besides glory, that is! Sadly, the only video of the event to make it online is a side-view, but that's okay. The audio is pretty riveting stuff! And hopefully something more direct will make its way online soon.

#canolis
#Major League Eating
#mle
#san gennaro
Do you know the scoop? Comment below or Send us a Tip
A new Gothamist is coming! We’ve moved comments over to our beta site. Click here to join the conversation and get a preview of our new website.