While we're still waiting for that bacon reality show we were promised back on April, a new pork-centric series premieres tomorrow promising to cover "every form of bacon under the sun." United States of Bacon, a spinoff of Destination America's United States of Food series from earlier this year, throws warnings of the porkocalypse back into the sty on its premiere this Saturday, December 10th at 10 p.m. and 10:30 p.m. To experience the "orgasmic sense of bacon" that's in store, check out the gluttonous trailer right here. 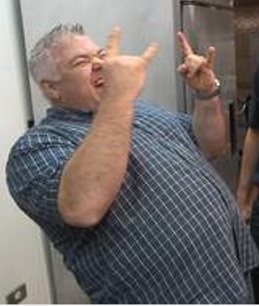 It's kind of a Man v. Food/Diners, Drive-Ins and Dives mashup, where host chef Todd Fischer travels around the country looking for the "most mouth-watering, stomach-growl-inducing, sensory-overloading bacon creations kitchens have to offer." Fisher is a California-based chef "notorious for big flavors, exciting experiences, and dynamic entertainment," according to his bio. He's certainly got that current TV host/chef look, including spiky, gelled hair so popular with the food dudes of the moment. "As a chef, bacon is among the foods closest to my heart," explains Fisher, without any apparent irony. "[This] is the only show on television dedicated to bacon and all of its inspired recipes, and we're happy to be documenting them for posterity." And for our obesity epidemic.

In the premiere, Fisher gorges on a chunky peanut butter bacon cheeseburger, a joint that offers a bacon happy hour and a Garbage Platter "exploding"—their words, not ours!—with eggs, potatoes, five different cheese, five kinds of meat and, for some reason, vegetables. There will be plenty of BLTs, bacon pizzas, hot dogs and other porky products in the 12 episode first season, which includes stops in many of our major cites. We can only assume Episode 13 follows Fisher as a doctor reads him the results of his most recent cholesterol test.

To get you ready for tomorrow's bacon-fest, here's a 14 minute video of bacon sizzling on a flat top. Happy Friday!