Video: Meet The Milkshake That Broke The Internet... And Our Intern

Every morning at 11 a.m., a crowd begins to form outside a tiny restaurant on Broome Street near bustling Sixth Avenue in SoHo. They aren't here for breakfast pastries or even breakfast sandwiches; they're here for milkshakes—and they're willing to wait hours to get them.

Perhaps you've seen the bizarre creations emerging from Black Tap, a narrow, railroad-style joint that's been slinging burgers since last spring. It's here that intrepid food tourists, mostly, are lining up outside, cramming themselves into the narrow aisle to capture the perfect Instagram shot of the absolutely insane milkshake creations designed by owner Joe Isidori.

There's one studded with candy balls, with a toupée of cotton candy and antennae made of rock candy and a gigantic lollipop. The Sweet N' Salty comes festooned with peanut butter cups, M&M's and pretzels, among other things. Another boasts a hat made of an an entire slice of cake. 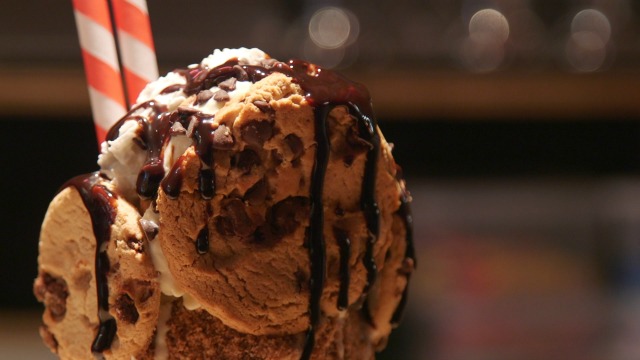 Isidori says they're making and selling hundreds of these shakes a day, often having to cut off the line and turn folks away beginning at 10 p.m. Many come with friends to help, others tackle the shakes alone and still more order a shake...to accompany a burger and fries. The latter would likely mean nearly two days worth of calories in one sitting—that is, if you can finish it all.

By our calorie crunching, the Cookie Milkshake rings up just over 2,500 calories. But NYC-based nutritionist Tara Mardigan says she would probably "bump that up."

"The argument is that this is a special event and you do it once in a while...but it can kind of skew what the mental picture of 'normal' is," Maridgan explains. She also cautions against trying to "balance" out the affects by starving yourself prior to eating. "That's the worst thing you can do. If you want to have something like this, make it an event...and go with a bunch of friends. Eat normally that day, try to stick to an exercise plan and, if you can, split it and share the wealth."

Our fearless intern Kellylouise Delaney made a go of eating an entire shake herself, finishing 11 of the 15 ounces of shake proper—toppings not included—leaving a respectable 4 3/8 ounces left in the glass. The result? "I had a little bit of a stomach ache!" Delaney revealed of the empty-stomach sugar rush. Next time, best to lay a burger base.

Special thanks to Kellylouise Delaney for donating her time and stomach.

Special thanks also to Tara Mardigan, an M.S., M.P.H., R.D. and NYC-based nutritionist also known as The Plate Coach. She is the Director of Nutrition for Fruit Street Health, a telehealth software company. She is also a co-author of Real Fit Kitchen, a cookbook for athletes, fitness enthusiasts and weekend warriors. Follow her @theplatecoach.

#black tap
#black tap burger
#gothamist films
#lines
#milkshakes
#nutrition
#original
Do you know the scoop? Comment below or Send us a Tip