In the wake of Mayor Bloomberg's latest effort to rule our lives/make sure we're not obese, Jon Stewart decided to dissect the proposed ban on sugary drinks over 16 ounces on The Daily Show last night: "It combines the draconian government overreach people love with the probable lack of results they expect!" Plus, the idea made Stewart agree with... Tucker Carlson.

Stewart did acknowledge that he and Bloomberg do have some things in common, "I know you can be intimidated by these large-sized drinks. You and I are both ... let’s face it, small. We might see a generously-proportioned sugared beverage and think of it as a drowning hazard, but it’s not fair!" 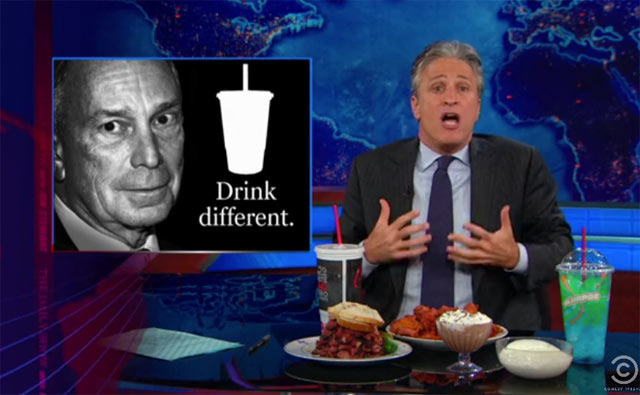 Stewart didn't understand why Big Gulps are suddenly bad while you're still able to order about 7 pounds of meat at the Carnegie Deli (plus it costs $3 to split it) and questioned why Serendipity 3's Frrrozen Hot Chocolate was legal! Also, he doesn't know why the fuck there are picnic tables in Times Square.

And Stephen Colbert said on The Colbert Report, “First he banned smoking, then he banned trans-fat. Then he added bike lanes everywhere, and now he’s gone way too far. This is America, the land of plenty! We haven’t achieved Type 3 Diabetes yet!"

#daily show
#Jon Stewart
#nanny bloomberg
#obesity
#sugary drink ban
Do you know the scoop? Comment below or Send us a Tip