The falling leaves and cool nip in the air mean just one thing: It's time to investigate the haunted bathroom at one Long Island Pizza Hut. Rumor has it that a long, long time ago, the Centereach Pizza Hut was once a Jack in the Box. Back in those days, a person could buy a Bacon Ultimate Meat Pudding for just a nickel, and children's meals came with the choice of toy butter churn or miniature canon (with real gun powder!) Things, generally, were better back then.

Unfortunately, Bathroom Death was commonplace, what with toilet technology not quite what it is today. Legend has it that a man, or a woman—the legend has some factual holes—was either murdered or committed suicide or maybe just fell asleep for a minute. Can't a person just rest their eyes anymore? In any case, it's haunted. These guys from the Jersey Shore said so.

"Supposedly, when you're in the bathrooms at a Pizza Hut, you will feel cold spots and hear whispering," the narrator, whom we'll call Pauly, says. (Spoiler: The whispering is your stomach beseeching you to leave the foul Pizza Hut. The cold spots are the mango-sized tumor pulsating against your hypothalamus!) Employees have also claimed that pots and pans fall. That is shocking—they have cookware at Pizza Hut?

Pauly bravely enters the women's restroom, armed only with his iPhone and a willingness to talk to himself in a women's restroom. Things get pretty Blair Witch around the 2:50 mark, if the Burkittsville woods were a Pizza Hut restroom and the iconic snot-covered protagonist was a freshly-shaven guido and the weird blood-soaked bags were a Glade PlugIn.

Several sweeps around the bathroom and a bout with the lights out reveal to our hero that the bathroom is not, apparently, haunted. A title card helpfully confirms this. 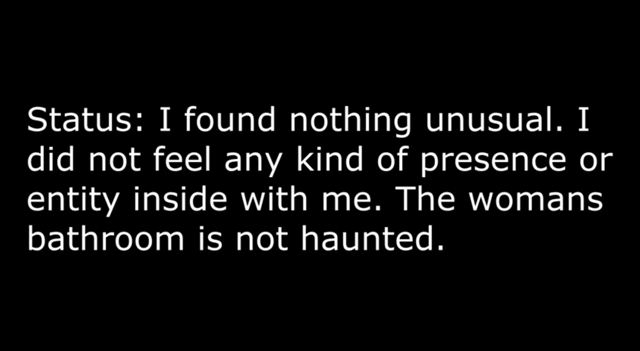 Fanboy Kev (actual name) then enters the men's room, completing to our eyes a pretty lackadaisical look around before confirming that the men's room isn't haunted, either, only "creepy feeling." The mission was a failure. Pauly and Fanboy Kev returned to their tanning beds empty-handed. Or so they thought.

A few days later, Pauly did what any Ghost Hunter worth his EMF meter would do: He investigated the footage, frame by frame. What he found was shocking. 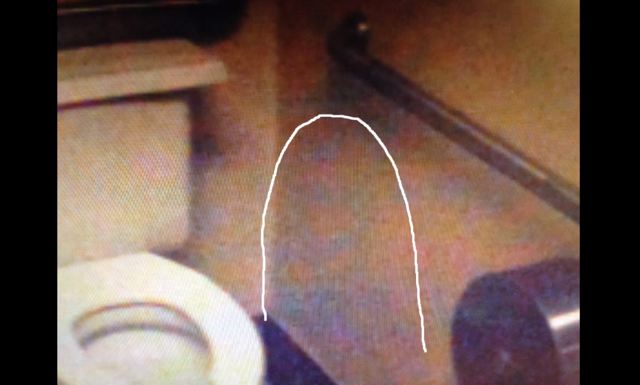 Wait, did I say "shocking"? I meant the other thing. Pauly claims to have found the silhouette of a woman's face hovering next to the toilet bowl. He insists that the Invisible Woman is not the result of a camera trick, and I believe him because there's nothing there, except for maybe some sort of urine stain. If you get drunk and squint, the shadows do form a sort of face, its expression twisted into a open-mouthed scream of silent, eternal terror. And who can blame him/her/it? That bathroom has seen unspeakable horrors. She probably looked pretty serene before they introduced the cheese pockets.

#haunted pizza hut
#long island
#pizza hut
Do you know the scoop? Comment below or Send us a Tip