At Williamsburg's Smorgasburg food market, two vendors alike in spirit but wildly different in philosophy do brisk business across from each other. One is Mighty Quinn's, the highly successful local barbecue chain that also had its start at Smorgasburg. The other is Monk's Vegan Smokehouse, a vendor that sells what it claims to be smoked "vegan barbecue."

Chris Kim, one of the two owners of Monk's, understands the inherent absurdity of vegan barbecue in concept. He also knows it tends to rankle some barbecue lovers—but he doesn't care.

"The subject of 'vegan barbecue' is obviously a touchy one for barbecue purists," Kim admits. "No pigs or cows are slaughtered, so we are automatically not a traditional barbecue joint."

Monk's is riding a wave of similarly minded food options, with vegetarian and vegan food seeing success in New York in recent years. Nowadays, you can easily find vegan pizza, vegan doughnuts, vegan burgers that taste like the real thing, and much more.

Kim knows this, but he also knows vegan barbecue is rare, with only a few other establishments in the U.S. executing a similar idea. (The two are located in Austin and Portland, of course.) It's not a crowded field, and Kim is excited by the possibilities. 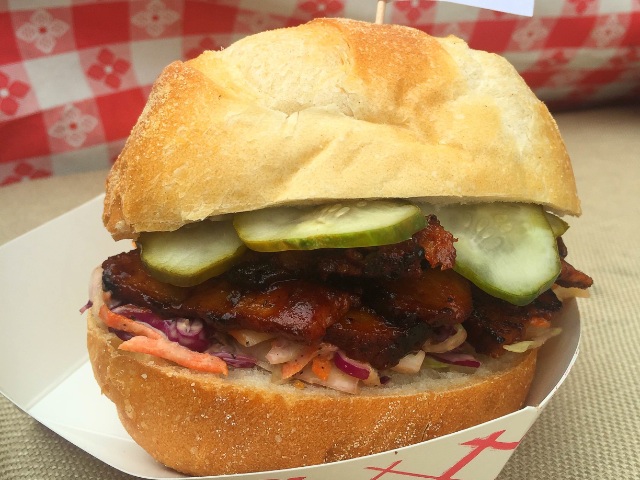 Monk's Meats was started by Kim and his partner Rebecca Lopez-Howes in late 2010. The duo experimented with making seitan (wheat-based protein) from scratch and started selling their handmade, plant-based proteins at the end of 2011. In the fall of 2013, they had enough demand to open a booth at Smorgasburg, where they've had some version of the business ever since.

Kim began smoking the seitan in 2015, attempting to combine some traditional American barbecue ideas with vegan cuisine. The process starts with making seitan fresh every week.

"We make our seitan in slabs, about two pounds each, that hold up to heavier treatment of smoking and grilling," Kim explains. "It's first dry rubbed with our spice blend. We then let it 'age' for about three days and then it hits the smoker. We smoke the sweet 'Kansas City-style' barbecue seitan over mesquite for a minimum of two hours before we serve it. We transfer it to direct heat towards the end of the smoker time to build up a little char. It's then rested for about 10 minutes, thinly sliced, and finished on the grill with our maple barbecue sauce."

Monk's Vegan Smokehouse opened this year, with locations at the Williamsburg Smorgasburg on Saturdays and the Prospect Park Smorgasburg on Sundays. Kim says his food sells out every weekend without fail. 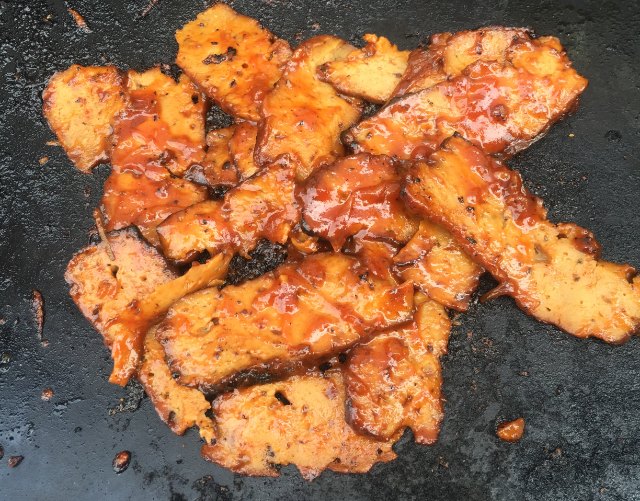 Several NYC pitmasters I spoke to for this story did not immediately dismiss the idea of vegan barbecue and actually seemed willing to give Monk's a shot.

Daniel Delaney, owner and pitmaster of Delaney Barbecue, isn't turned off by the idea of vegan barbecue. He even mentioned that when his company does catering for weddings, they will sometimes prepare a vegan seitan barbecue dish to accommodate guests.

"The oldest BBQ traditions were ways of bringing people together," Delaney says. "It was food that evoked comfort and welcome. And so, if this food accomplishes the same goal then sure—it's BBQ."

Hugh Mangum, the pitmaster and brainchild of Mighty Quinn's, recently told me "creativity trumps everything," and with that in mind, he appreciates the goals of Monk's Meats.

"I'm not following someone else's playbook and it sounds like they aren't either," Mangum said. "They are doing their own thing and that's awesome. It's great that they're trying something new and different."

But Arrogant Swine pitmaster Tyson Ho, a BBQ traditionalist who makes fantastic Carolina-style BBQ, did not take kindly to the concept.

"Vegan BBQ is as nonsensical of a term as pork-chop sushi or composing a garden salad out of candy bars," Ho said. "BBQ centers around the philosophy of contextual communal feasting. Smoked seitan is violently antithetical to that. Rather than call to mind the excessive feasting of laborers at the end of the fall harvest, it's an anemic dietary constraint. Rather than a celebration of abundance, it's a solution to a problem no one wanted solved." 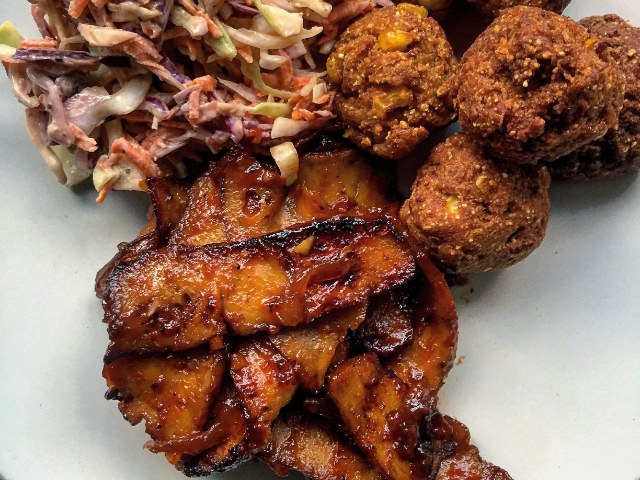 Ho's opinion is something I've heard from many meat eaters and American BBQ purists who I've told about Monk's. But none of that seems to be hindering Monk's growing popularity.

Monk's was recently nominated as a finalist for the NYC Vendy Awards in the new vegan category, competing against other strong vegan vendors in mid-September. And at some point, Kim plans to open his own deli-style storefront, a restaurant, or both in NYC.

"We'd love to be able to open a vegan BBQ joint somewhere down the line and offer a wider range of BBQ fare, with more proteins and lots of sides," Kim said. "But for the rest of this season, we are going to be refining our BBQ process at Smorgasburg and finding new and exciting ways to enhance what we are already doing."

#barbecue
#bbq
#monks meats
#monk's vegan smokehouse
#vegan
#vegan bbq
#original
Do you know the scoop? Comment below or Send us a Tip