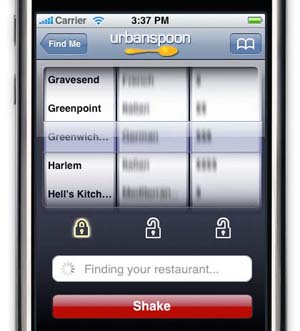 Urbanspoon is a free iPhone application aimed at the indecisiveness gripping a certain subset of young moneyed urban dwellers. Sometimes it is really hard deciding between dinner at Pastis, Spice Market or Buddha Bar! So with a shake, your iPhone becomes a cross between a Magic 8 Ball and a slot machine that uses GPS technology to land on a nearby restaurant, categorized by price, proximity and cuisine. But the app was not so killer for the Times’s Frank Bruni, who recently cruised around town testing it:

I was standing smack in front of Dressler [in Williamsburg], using the phone’s Urbanspoon restaurant-search application, which was supposed to pinpoint my location and recommend the best options nearby. I shook the iPhone… It directed me to a wine bar several blocks away. I shook again. It directed me to an Italian restaurant all the way over the Williamsburg Bridge, in the East Village.

With another shake, a Williamsburg coffeehouse came up, and with yet another shake it was back to the East Village. Even when I specified “Williamsburg” as my preferred neighborhood and “American” as my preferred cuisine, Dressler didn’t come up right away. It was a laggard, an afterthought, and thus revealed the foibles and limitations of the Internet dining guides to which more and more of us are turning for help.

Which is why we should all keep things simple by making our dining choices via the print edition of The New York Times. Ethan Lowry from Urbanspoon responds: “I'm pretty excited that Frank Bruni spent half his weekend playing with our iPhone app! Overall I'd say he has some fair criticism. But I also think he may have missed a bit of the point – if you're standing in front of a restaurant, and that's where you want to eat, you don't need Urbanspoon to tell you where to go. Our app helps you when you can't make up your mind, so we intentionally randomize the results somewhat.”

#frank bruni
#iphone
#restaurant
#test
#urbanspoon
Do you know the scoop? Comment below or Send us a Tip