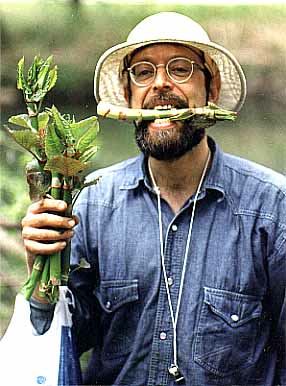 "Wildman" Steve Brill has been helping New Yorkers get a little closer to nature with his foraging tours of Central Park, Prospect Park, and more for three decades. Now entering his 30th season, Brill, who describes himself as a “naturalist” and a “science geek,” is still uncovering new and delicious wild eats in the middle of the city—and despite the occasional run-in with the Parks Department, he has no plans to tame down his foraging adventures. We talked to Brill about his favorite edible finds, got some recipes, and learned how to avoid those pesky poisonous plants.

And if you like what you read below, tune in to BBC America’s "No Kitchen Required,” a new food travel adventure series that takes chefs and viewers to some of the most remote, exotic locations across the globe. Premieres Tuesday, April 3rd at 10pm Eastern / 9pm central only on BBC America. For more updates on the series, be sure to like No Kitchen Required on Facebook. (Continue reading to watch an exclusive trailer.)

How would you introduce yourself for those who don’t know who you are? I’m a freelance naturalist environmental education, author, and artist. I lead public tours in parks, mostly throughout greater New York area. I work with schools, day camps, birthday parties, scout troops and more.

Sometimes the Park Department arrests me, sometimes they hire me, sometimes they do both. 26 years ago, they put undercover agents on my tour and arrested me. They charged me with criminal mischief for removing vegetation from a park for eating a dandelion. Fortunately, I had eaten all the evidence, so I avoided a year in jail. Then the Department dropped the charges and hired me to do the same walking tours they had arrested me for.

What is a naturalist? It’s someone who studies nature. As in the 19th century. I’m always looking for new things to learn, outdoors, and even indoors, I’m constantly listening to science podcasts. I’m very involved with nature and I do a lot of experiments in the kitchen with natural foods. I have a cookbook with 500 recipes, and I’ll be coming out with a recipe app with close to 1000 recipes this spring.

How and why did you get interested in foraging? I had started to get interested in cooking. I was exploring ethnic stores in Queens, where I lived, and as I was riding my bike through the neighborhood, I saw these Greek women picking something. It turned out they were collecting grape leaves in a park. So I came home with a bag of grape leaves, and after that, I started getting books and going out to find plants by myself. I’m still learning the best of them—I just recently discovered Sichuan peppers growing in Prospect Park, across from the zoo. There’s another plant called bitter dock, and for 29 years I told people, “It won’t kill you, but it tastes so bad it will make you wish you were dead,” which is true if you eat it raw, but I just learned that if you cook it, it is truly delicious.

What is your favorite park to forage in and why? I love them all. Prospect is hard, because there are so many edible plants and I can’t get to all the places I want to get to in four hours. Central is great, there so many exciting things that the lawnmowers can’t quite get to along the rocks and by benches. I love another place called Crestwood, along the Bronx River, with a tremendous abundance of early spring plants you can’t find anywhere else. Mushrooms are everywhere—you can find then after it rains all over the place in late summer or early fall.

What are some of the foods you can find in city parks? Well, this winter alone: hairy bittercress (which is neither hairy nor bitter), field garlic, garlic mustard, curly dock, lesser celandine, roots like sassafrass and common evening primrose. There’s a green called chickweed that tastes like corn on the cob. There are dandelion greens that are only good when the leaves are young in the cold weather. There are probably some wild carrots around too.

What do you cook with your finds? I just made some chocolate truffles. The Kentucky coffee tree grows in Central Park, Prospect Park, and on street outside of Inwood Park. You roast the seeds and they taste like coffee. So I mixed some of the ground seeds with Dutch unsweetened cocoa, almonds, dates, melted unsweetened dark chocolate, some cocoa powder, and fresh vanilla.

I used stevia as the sweetener. I rolled that up into balls, then rolled it again in carob powder. They make incredible chocolate truffles. I also make a chocolate fondue with wild apples from Central Park. I make a wild lentil soup with a bunch of greens and field garlic from around Westchester. I’m always, always playing around with new things.

What’s your culinary advice for cooking with foraged ingredients? Use natural whole ingredients, and see what various cultures have discovered about your ingredients over hundreds of years. See what kind of spices and herbs and oils are used in all the different cuisines—see what they’re doing with it and go from there.

Any advice for aspiring foragers? Try everything on the boss first! [Laughs.] No, really: there are some very dangerous plants—some will kill you after one mouthful. So you do need to know what you’re doing. Start with easy plants: dandelion, mulberry, cattails, those are easy to recognize. Read books, come on my tours, download my app, and start with the plants that don’t have poisonous lookalikes, and are that are common widespread.

You’re going into your 30th season—how have you seen the public’s attitude toward foraging change? It’s gotten bigger and foraging has become more mainstream, even faddish, because even chefs are touting that they’re using wild foods. There’s more information available now, there are websites and other information that’s readily accessible. In 1982, I’d one or two people on my tours. In 2009, I had 78 in Central Park. Everyone walked away with something. There’s plenty to go around.

Where did you get the nickname “Wildman”? I’ve been practicing transcendental meditation since the mid ‘70s. The name came to me while I was meditating, the winter before I lead my first foraging tour, and it’s stuck with me ever since.

Like what you've read here? Tune in to BBC America’s "No Kitchen Required,” a new food travel adventure series that takes chefs and viewers to some of the most remote, exotic locations across the globe. Premieres Tuesday, April 3rd at 10pm Eastern / 9pm central only on BBC America. For more updates on the series, be sure to like No Kitchen Required on Facebook.