A popular Upper West Side restaurant closed today, apparently without warning. Isabella's posted a sign noting that "this location has permanently closed," according to West Side Rag, which also reported a passerby saying, "Wow, they were open last night."

Isabella's occupied the southeast corner of West 77th Street and Columbus Avenue—a block from Central Park and across the street from the American Museum of Natural History—and had a large al fresco dining section on Columbus Avenue. Lines for brunch were a familiar weekend sight. It was also a "hot" restaurant back in the 1990s—in the Seinfeld episode "The Visa," Jerry complained about it:

Elaine: Alright, well if you change your mind, we'll wind up at Isabella's probably around seven.

Jerry: No, it's too trendy, no Isabella's.

"The landlord chose not to renew our lease," an employee told West Side Rag. Isabella's was owned by BR Guest, which also owns Blue Water Grill, Dos Caminos and Bill's Burgers. The company was recently bought by restaurateur Tillman Fertitta, who had boasted in November, "It’s 15 Manhattan restaurants that include the Dos Caminos, the Bill’s Burgers of Manhattan, the Atlantic Grills, Blue Water Grill and Isabella’s. When you put those with our Chart House and Bubba Gump’s and Maestro’s and Morton’s, it will give us 21 restaurants in Manhattan, which will make us the largest independent operator in Manhattan." 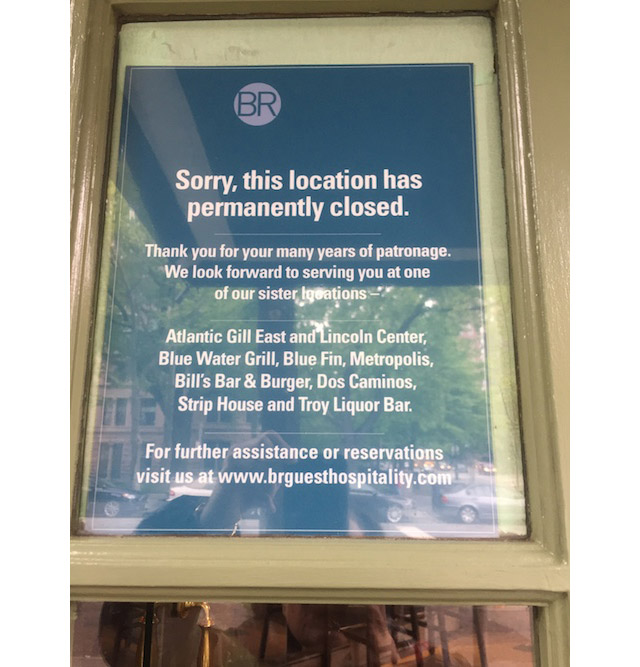 (via West Side Rag)

Upper West Side resident Joseph Bolanos told West Side Rag, "What one man built and operated successfully for over two decades, was destroyed by corporate entities in recent years that lacked any knowledge of our UWS community and the landmark value of Isabella’s."

A diner posted a review of her Mother's Day brunch experience on Yelp today, "Going to Isabella's was a Mother's Day tradition but that came to end yesterday. They no longer give you a complimentary beverage, not even coffee or tea, with your brunch entree on holidays. This was the appeal of going for brunch there considering the food is nothing to brag about..."