Updates 1:00 p.m. THE KING IS DOWN. Eight-time hot dog eating champion Joey Chestnut has been dethroned by Matt "Megatoad" Stonie, 62 dogs to 60 dogs (Tim "Eater X" Janus came in third with 35). "I just didn't find my rhythm." Chestnut said. "I did bad. He deserved to win."

Hot dogs have been ravaged. History has been changed. America will never be the same.

FYI, Stonie's post-college career plan is to become a dietitian. According to Mercury News, "A sophomore at Mission College in Santa Clara, Stonie is currently majoring in nutrition, a seemingly contradictory decision given his passion and talent for stuffing food into his mouth."

Updates 12:50 p.m.: The competition has begun! We learned some bad news about Chestnut though: he apparently has broken up with his girlfriend/trainer who he proposed to at last year's competition. But perhaps that loss is what is fueling him to new heights of stuffing-food-in-his-mouth this year. "It's back to flirting with the girls at Panera bread after this competition," one insightful commentator said.

This is what America is all about pic.twitter.com/DuxTft6iS1

Updates 12:40 p.m. The best part of the entire event—the over-the-top intros—have just happened. "I give you america itself...Joey Chestnut," is one hell of an intro, even if he isn't being paraded in on a chariot this year. Some screenshots of some of our favorite competitors below.

In case you're wondering, ESPN explained the physics behind ingesting 69 hot dogs:

[Original Post] The dogs have been soaked, the costumed characters have been prepped, and America's favorite binge-eating contest—Nathan's 4th Of July Hot Dog Eating Contest in Coney Island—is right around the corner. We can practically taste the regurgitated bun!

Joey Chestnut trying to beat his 2013 record of 69 hot dogs & buns in 10 minutes. This fit in his stomach pic.twitter.com/J75XdugAJe

Pre-show festivities have already gotten underway at the Coney Island Boardwalk. The women’s competition has just begun, while the men's competition will start at 12:30 p.m. and be shown on ESPN2. Unfortunately, they're being stingy with footage from the women's competition, where former champion Sonya Thomas is hoping to regain her title from Miki Sudo.

As for the men's competition, there is only one: Joey Chestnut, the man who was born to swallow processed meat trimmings, is back to defend his title after last year's 61-dog shellacking. His all-time record stands at 69, so we'll see whether he can muster the courage and tenacity to swallow more hot dogs than that.

While you get excited for all the swallowing action, learn more about Chestnut (like his ability to eat things that aren't hot dogs), look back at the history of fat dudes eating hot dogs, and ponder what would happen if someone suffocated on a treacherous dog at the event.

We'll have updates once the men's competition begins, and people start making faces like this. 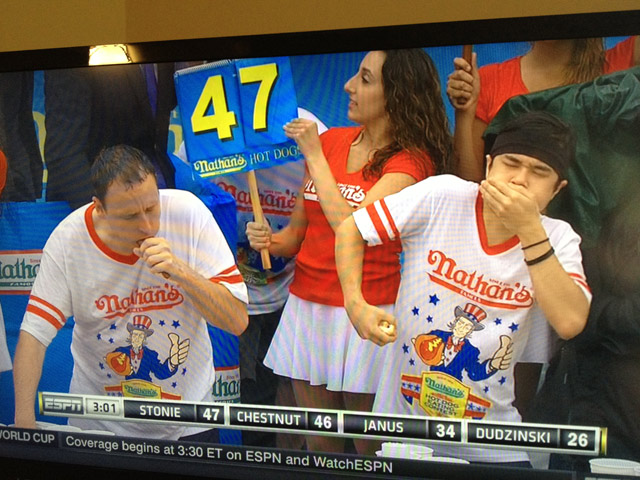 Chestnut, Stonie, and the faces of greatness

#hot dogs
#july 4th
#man bites hot dogs
#Nathan's Hot Dog Eating Contest
#nathan's
#original
Do you know the scoop? Comment below or Send us a Tip
A new Gothamist is coming! We’ve moved comments over to our beta site. Click here to join the conversation and get a preview of our new website.