Longtime DUMBO gastropub and indie screening room reBar has abruptly closed today amid claims of bankruptcy. Signs were put up at the restaurant sometime early this morning, and managers were sent a brief email from owner Jason Stevens early Friday morning, reading in full: "Rebar is bankrupt and closed. Please dispose of your keys and do not enter the premises. Please forward to any staff not included."

Several employees who showed up to work this morning did not receive that email. "He left 35 people stranded, and most of us are parents," said Dina Thaverne, 36, who has worked there almost a year. "Most of us have families." Thaverne said she had mostly enjoyed working at the bar up until recent months, when there have been a flurry of firings amid bad communication: "It's been good, but lately Jason has been dropping people like flies. No warning, no pink slips, no explanations." She added that there is a surprise 40th birthday party scheduled for tonight, along with two weddings this weekend—not to mention weddings booked almost every weekend through next year.

"I showed up for my normal serving shift today," said Adam Keaton, who has been working as a server there for about four months. "It hasn't even been slow, it's been busy the last couple of weeks. My rent is due today too, we're supposed to get paid today." Keaton added that from his perspective, Stevens has been a good boss, but he can't understand how this has happened, nor why employees weren't told beforehand.

"I don't know who put the sign up, I'm just as clueless as you," said Craig Anthony Miller, who has been official art curator there for almost six years. "I came in and saw the sign and thought, 'I need to get the artwork down so it's safe.' There was no warning, Everybody's thinking it was so...abrupt." 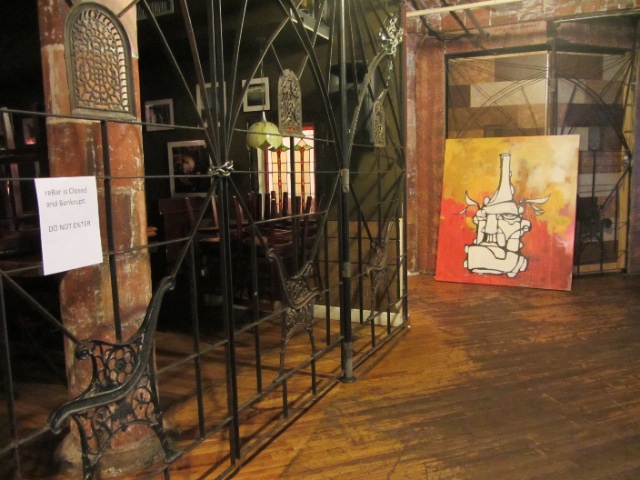 Taking down the art (Ben Yakas/Gothamist)

Several of the employees showed Gothamist text messages from a general manager who told them he also was blindsided by the announcement. Neither Stevens nor his landlord, Joshua Guttman, have responded to requests for comment.

One former upper management employee, who asked to remain anonymous, filled us in via email on more details:

Today was payday and roughly 50 employees are not getting their two week paychecks. We are suppose to have a wedding tomorrow and Sunday as well as every weekend for the next year plus. Literally hundreds of couples who have paid in full or partially to have their weddings at rebar and other venues have been screwed by this man. Not to mention the dozens of purveyors and vendors who are owed money.

The bar was shut down by the Health Department in 2011; at the time, Stevens complained about problems with property owner Guttman.

The former manager said today that the bar was shut down last year as well, but Stevens had forged ahead with plans in recent weeks:

They came and closed the place down and took all the books and cash drawers. We have problems paying purveyors sometimes. But [Stevens] spends money like it's no problem and is constantly talking about expanding etc. He just hired a new chef 3 weeks ago to revamp the menu and push the catering business. The new chef never got a paycheck. He is in contact with NBC news and did an interview on camera. It was just a normal week this week.

The money that comes in for a wedding usually comes in months if not a year before and has come and gone. I don't think they'll be any refunds outside of court because there is no money in the Rebar account. He has other businesses too but no one knows what they are.

Our paychecks say "Fulton Ferry Market, Inc." Maybe he can pay them with other moneys. Jason has not contacted anyone or answered calls etc since that last email.

Weddings at reBar aren't cheap: according to Woman Getting Married, you can expect "costs to range from $130-$160/pp before tax and gratuity. However, if you want a wedding on Saturday night, you would have to reserve the bar for a minimum of $25,000."

Thaverne added that employees are nervous they won't get their last paycheck; she says she's worked for free for three weeks if so. When answering the phones today, she has been telling callers, "Jason has stolen all his employees money, got bankrupt, and is on the run."

Update: Various local businesses are offering help to couples whose weddings were disrupted because of the closing. Brooklyn Winery says:

We at Brooklyn Winery are so sorry to hear about the clients who have been left without a venue due to reBar's sudden closing. As a member of the Williamsburg business community, news like this is always tough to hear. We would, however, like to let reBar's clients know that we do have several dates available for weddings, birthdays and other events for this year, as well as next. Please feel free to contact us so we can help ASAP!

Veronica M. Liskiewicz, who is the Social Catering Sales Manager at 3 West Club, is also offering help to couples; she is a "former reBar bride (November 14, 2010) and the first reBar wedding and events coordinator (January 2011 through February 2013)." She says she is working "to create a special package for reBar couples who have lost a good amount or all of their deposit in reBar’s closing"—couples can contact her at veronica@3westclub.com.

Anyone who has a wedding scheduled for now closed #rebar and needs a great alt, check @ForninoPizza on pier 6 in DUMBO or DM me for Info!

@jenist Let us know if theres anything we can do to help!

@gothamist We're happy to speak with anyone searching for a new home for their #rebar event.

@jenist I'm the GM at @thecountingroom and we've held many weddings here in our 4+ yrs open. Happy to help! #Rebar #ReBarNYC

Please let couples know that they may also reach out to us at info@thegreenbuildingnyc.com or at 718.522.3363 for information on special rates and packages for ReBar couples. We also represent a gallery for events of 75 people and fewer and  501 Union.  All venues can provide full food and beverage services through our in-house caterer Purslane and floral, event styling and day-of coordination through our in-house design division Starling on Bond.  We will get back to them ASAP.

Daniel Power of Powerhouse Arena commented, "Wow this is very sad; Jason seemed like a great guy, and the place was busy...that said if any of you are stuck, we would like to help if we can, we care about the neighborhood (we are a bookstore event space at Main and Water st.s) and this is not good for any of us: contact Craig@POWERHOUSEArena.com, or 718-666-3049 x123 and we can try to see if we can help."

Fornino at Pier 6 (in Brooklyn Bridge Park, DUMBO) would be happy to talk to couples in distress about their venue as an option from now through fall season! It's just down the road in DUMBO and attached to the park. denise@fornino.com is the contact there for events. I had my wedding rehearsal there last October and they did a killer job—it was a huge hits with our guests (more than the actual reception we held elsewhere, in fact). Aside from gourmet pizza, they have specialty options and are happy to satisfy menu requests. There are two levels: one indoors, one on the roof with grand views of lower manhattan. Between the two, they can accommodate small parties to ones around 175-190 people. It's a lot of fun, amazing staff, and happy to customize to requests!

Update: Here are some of the stories (and info) of couples who have been screwed by the shuttering:

Annie Scheel (anniescheel@gmail.com) and her fiancé told us they were supposed to have their wedding there in November: "I guess now we are not. We gave them a 50% deposit and have been making monthly payments. But at least we have several months to figure out what to do. I really feel for the people who were supposed to have weddings there this weekend and the following weeks. The thing about rebar is that the wedding is almost all inclusive venue, staff, food, bar even flowers and the dj. Kind of hard to replace all of that at the last minute... In New York City..."

James Gray King's (jamesgrayking@gmail.com) wedding was planned for reBar in August; he called reBar this morning after seeing the article: "A server responded and said they are just taking names and numbers now. I have been working two jobs for a year to afford my wedding while my fiancé was recovering from a long term illness and was unable to work and this man has now taken all of the money I had in the world for this."

@Gothamist we had a wedding booked at rebar for July 26 this summer and paid off our whole balance.

#rebar couples, we can help, new Red Hook venue, so lots of avail. Msg for info. Don't despair, lots of us in industry are willing to help!

Another couple, whose wedding is planned for October, contacted us, saying they felt bad for employees: "I imagine that at the moment all of reBar's staff are trying to figure out their job situations, so I don't blame anyone for not getting in touch just yet. It sounds like everyone was blindsided. All of the employees I've talked to previously have used @rebarevents.com email addresses, and it appears that that domain has been shut down, along with their website, so they might not even have access to their email and contacts."

Aisling Jumper (aislingjumper@gmail.com) writes: "My fiance and I booked our reception there for August 9, 2014. We booked it in March 2013. We have almost completely paid for the wedding, with only the final payment left. Literally thousands of dollars. We are now scrambling to see where can take us on August 9. My family lives in Ireland, New Zealand and England, they have spent thousands on flights to come to Brooklyn for our wedding. We can't change the date. It's devastating. I alternate between panic, tears and frenzied action."

Steve Obeng (steve.obeng@gmail.com), whose wedding was planned for August, told us: "We're at a loss for what to do now. We had just finished making payments for the venue...It's really frustrating. They actually double booked our original date and time, but the coordinators that we were working with were so apologetic and accommodating that we decided to stick with them. We'd finished paying off our minimum guest list ($15K+). It's going to be incredibly difficult to pay for another venue with all that money gone. While we're really pissed and scrambling here, we're also feeling for the staffers—looks like they got pretty screwed too."

Update:An Indiegogo campaign has been set up for the couples to pay for new weddings:

#bankrupt
#brooklyn
#dumbo
#rebar
#original
Do you know the scoop? Comment below or Send us a Tip