[UPDATE BELOW] Roberta's, the Most Important Restaurant in all of New York City, is just so busy feeding the Clinton family and trying to clothe its employees that it's soliciting unpaid help from interns giving interns the opportunity to learn valuable farming skills.

DNAinfo reports that a Craiglist posting (since removed from the site but happily still available elsewhere), describes an experience low on intellectual growth opportunities but high in manual labor. Working not in the stuffy restaurant itself but on the lush grounds of Roberta's own urban garden, the unpaid farmhand lucky intern will, among other things, "help maintain our bee hives, harvest honey, build and maintain the compost, help with carpentry projects, such as building planter boxes and hoop houses." The posting promises an experience more rewarding than any amount of money, you filthy capitalist.

Compensation is learning how to run an urban farm for a restaurant, being in a very fun environment, working with creative chefs, meeting other urban farmers and getting acquainted with NY's farming community. Free lunch every time you work (pizza).

Unsurprisingly, the request has been met with considerable indignation that a restaurant that's so successful customers wait over an hour to get an $18 pizza can't seem to cough up the funds to pay its interns. The blog NewYorkShitty spotted a retaliatory sign apparently posted on Morgan Avenue, bashing the eatery for its gall. "For having already contributed so greatly to the damaging gentrification of Bushwick, is Roberta's so greedy as to exploit workers and flout labor laws just to save a measly few bucks an hour?" the blog asks. 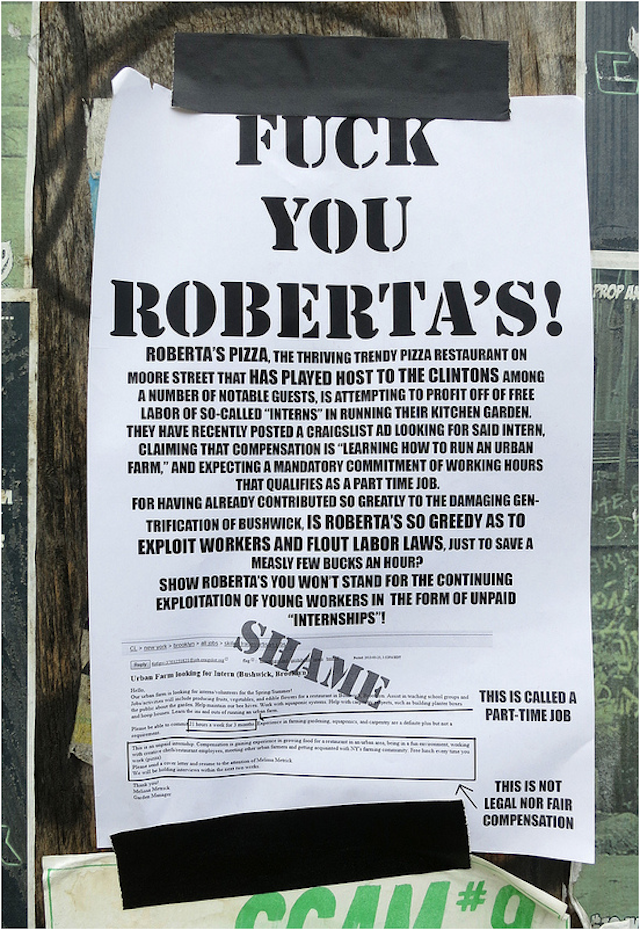 We contacted Roberta's for comment, but were directed to their press office (presumably also staffed by interns?). We'll update the story if we hear back.

Update: Roberta's issued the following statement in defense of their farm intern program:

We do offer internships that involve working with our head gardener. These internships are unpaid. Interns sign on—voluntarily—to learn about planting and growing edible plants in an urban environment and to help share that knowledge with the surrounding community by, for example, helping to give educational tours of the garden to school groups. All of this information and more is clearly stated in the advertisement for the internship.

We also asked how many interns are currently volunteering with the farm, and the answer is: Zero.

#bushwick
#internships
#roberta's
Do you know the scoop? Comment below or Send us a Tip