[UPDATE] No Williamsburg Dumpling Brunch, But Here Are 3 Other Weekend Food Events

[UPDATE BELOW] Williamsburg's excellent new Chinese eatery Kings County Imperial has launched a new Friday and Saturday dim sum brunch that doesn't involve tracking down your favorite dumpling dishes as servers wind their way through tables with carts. Instead, diners are given a menu and a pencil to mark down how many of each dumpling or dish they want, including their new brunch cocktails like The King's Mary, a bloody made with soy sauce. Everything is incredible—they make all of their dumplings in-house, including the skins—but the Chicken Buns ($4), Wok Seared Long Dumplings ($8) and Pork & Shrimp Shumai ($5) are especially good.

Update 8/15: A tipster tells us that sadly, this brunch deal's been postponed until further notice. We'll keep you updated if and when dumplings are back on the table.

In a similar vein, UMi Bushwick will be popping up at Box Kite's St. Mark's Place digs Friday and Saturday night from 6 p.m. until drunk-friendly 3 a.m. On the menu, their signature bunwiches, each of which represent a different place in Asia. Their Chimaek-Bun (Korea, $10.50) comes with beer-battered korean fried chicken with a gochujang-mirin glaze, kimchi chutney, black sesame sauce, scallion salad, nori and toasted sesame, for example, while their Bun-Mi (Vietnam, $9) features caramel pulled heritage pork, vietnamese pickles, fried shallots, crushed peanuts and fresh herbs. 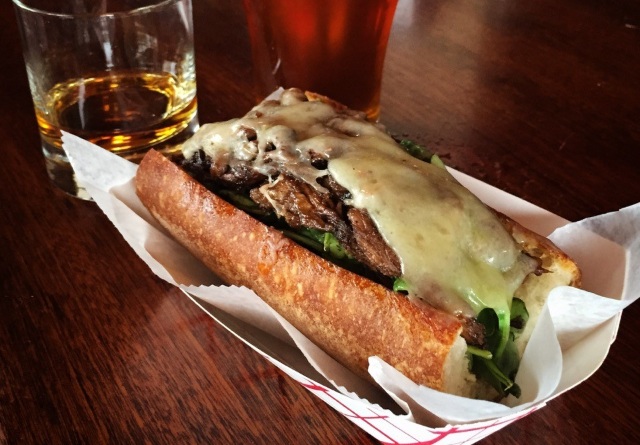 Brisket Sandwich at the Richardson

Seven years ago, The Richardson opened on Williamsburg's Graham Avenue and to celebrate, the cocktail joint is throwing a big party on Saturday afternoon with food and drink deals from 2 - 6 p.m. A pint of Founders All Day IPA will go for $5 and same goes for shots of Wild Turkey. More high-minded individuals can score an Old Fashioned for just $8 or try a selection from their newest cocktail menu, which includes The Cold, Dark & Bitter, a rotating selection of amari on draft. To stave off the drunchies, nosh on a Beer-braised Brisket Sandwich for the wallet-friendly price of $8.

Kickstart a Sunday Funday with the Brooklyn Homebrew Takedown, pouring its way into Downtown Brooklyn's Hill Country Barbecue Market. From 1 p.m. to 3 p.m., a host of homebrewers will be competing for the best of the beers, with an audience favorite and a more formal judges panel doing the deciding. There'll be 18 different beers from local folks on tap, plus the restaurant will be offering barbecue specials to sop up all the brews. Tickets are a respectable $20 for a taste of all the brews.