[UPDATE BELOW] First we had the blood bagels, then came the frog salad, followed by seafood boils and insect soup and finally the wild animal wraps. Now that we've crossed half of the biblical plagues of food service off the list, we get the final nail screw in the coffin to end all desire for lunch. As in, a literal screw.

Lunch @justsalad Chelsea and got a rusty nail in my Tandoori salad. Glad I didn't bite. @Gawker @Gothamist @BuzzFeed pic.twitter.com/fncDHwcqSL

On Twitter comes the tale of Shaul Stone, who just wanted to enjoy his Tandoori Fire Salad from Chelsea's Just Salad in peace, not build a shelf or whatever. Here's the harrowing tale he told us from his lunch hour:

I go here about once a week, rotating between Chop't and Just Salad for my workday lunch salads. I was feeling confident about Just Salad lately after the Chop't rat story and could not believe what I saw today in my own. I was about halfway done my salad when I noticed the dark object (definitely a nail).

It was the Tandoori Fire salad which was a change for me. I usually get the Thai Chicken Crunch. I was actually quite enjoying the salad when I pulled my fork out and happened (luckily) to look down. I saw it was dark and at first thought it was a twig or a worm, but nope—nail, and a rusty one at that.

Stone tells us that he was too busy to return the salad to the store (he got it to go) but instead sent out the above Tweet, which got the attention of Just Salad corporate who apologized and said they would look into the incident. As of press time, Stone had yet to hear back about any action that would be taken. 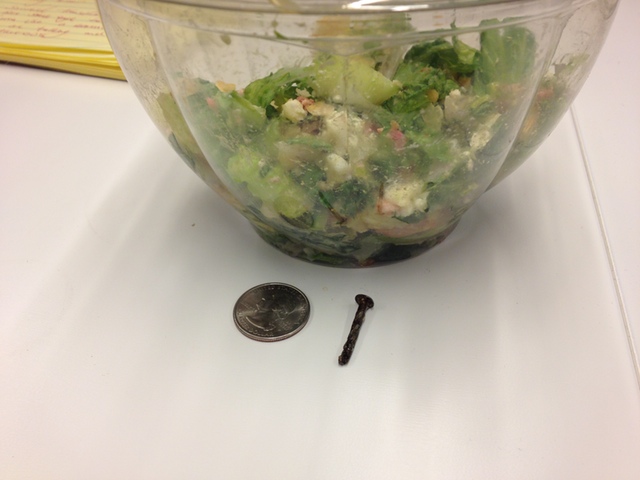 Stone tells us he "got a new tetanus shot only about a month ago" and doesn't have plans to seek medical attention unless he starts to feel sick. As a once a week visitor, Stone says he'll return if he's "convinced that they have taken proper precaution to prevent this from happening to me, or anyone else again in the future." Hide ya screws, hide ya nails...

He's also hoping for "fair recourse" for getting totally screwed; "as far as recourse, I am not yet aware of their policies, however, to know what they are doing to ensure safety and prevent this from happening again and perhaps a donation to an environmentally friendly charity, or one that they otherwise support." A call to Just Salad yielded a snippy rep telling us they, "only deal directly with customers," so hopefully Stone has better luck getting his perfunctory gift card or whatever placating terms they opt for. In the meantime, a unneeded reminder to look before you bite.

Update 6:25 p.m.: Stone tells us Just Salad has apologized and tried to make things right. "Just Salad got in touch, apologized, said they cannot identify anything in the store that would match the screw/nail's description and offered me $100 gift card," Stone writes in an email. "I told them it was a fair offer but asked them to donate it to charity instead. I also said my hunch was it was from one of the mezzalunas they employ to chop the salads. I will let you know if they respond." 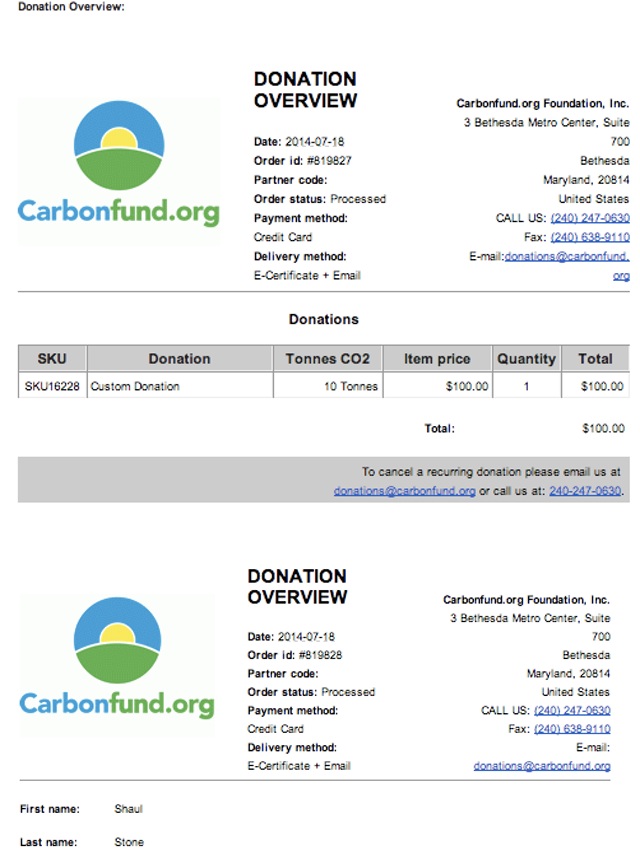 Update, Friday 11 a.m.: Just Salad has delivered the goods! Stone shared with us receipts from the company's donation to CarbonFund.org to the tune of $100. Stone also decided to match the donation, which will help to reduce 10 Tonnes of CO2 Emissions. And faith in humanity was restored!

#ew
#just salad
#lunch horrors
#rusty screw
#original
Do you know the scoop? Comment below or Send us a Tip