The promotion, which seems almost too good, will be available between 11 a.m. and 2 a.m. at the restaurant's four outposts in Chinatown, the East Village, Flushing, and Sunset Park.

Customers who show up with an "I Voted" sticker or an (illegal) ballot selfie will have their pick of apparently unlimited choices off the hot pot or BBQ menus—an impressive array of options that includes pork belly, squid, dumpling skin, cow tongue, duck, and pigs blood.

"You can choose as much as much as you want for two hours," an employee at the Grand Street location told us on Wednesday. "There's no limits. As long as you vote, you’ll get free barbecue and free hot pot."

Indeed, a banner outside declares, "Your vote, buffet on me!" and "99 Favor Taste Will Fully support people to vote." 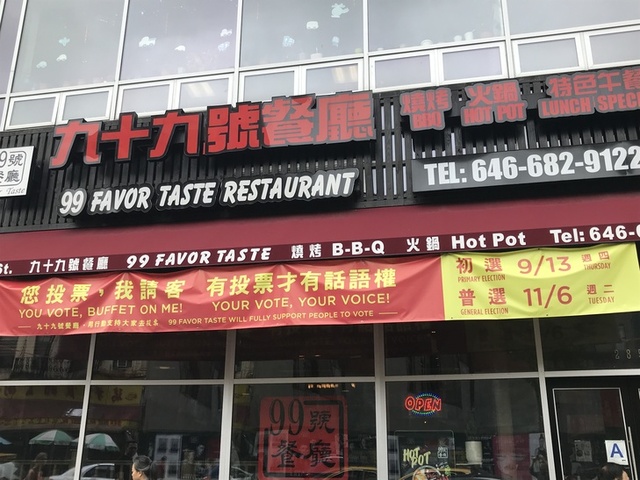 A chicken in every hot pot (Gothamist)

Asked whether this is one of those while supplies last freebies, the employee assured us that they would not run out—a bit of realism about our state's historically terrible turnout in primary elections, perhaps?

And goods news for the thousands of New Yorkers prevented from voting in the primary by New York's bewildering election laws: The meat-and-vote special returns for the general election on November 6th.

See any other election day freebies? Drop us a line a tip@gothamist.com.

UPDATE: Some deals are too pure for this world. According to the state Board of Elections, offering delicious hot pot and Chinese barbecue to New Yorkers who vote is technically a class "E" felony. The issue was first addressed by the board in 2009, in response to a complaint that a convenience store was giving out ice cream cones to the children of voters.

In the board's view, "Any person who directly or indirectly, pays, lends, or contributes, or offers to...any money or other valuable consideration to or for any voter, or to or for any other person, to induce such voter to vote or refrain from at any election...is guilty of a felony."

Still, a spokesperson for the BOE said he was not aware of anyone being prosecuted for incentivizing people to vote via free food.

UPDATE 12:30 p.m. September 13: Around noon, the St. Mark's location was "moderately crowded" with "no line," according to our Scott Lynch, but he noted, "People keep filing in and almost everyone has Voted stickers."

Lynch shared photos of the scene (at top), adding that the restaurant was "very generous with the free food." Also a manager said the Flushing location was "crazy."

#99 favor taste
#election day
#free food
#hot pot
Do you know the scoop? Comment below or Send us a Tip