The situation with the state of the L train and the un-shutdown has only grown more confusing as officials have bandied about contradicting information and plans. The whole thing kinda makes you want to drink—and local brewery Blue Point agrees. Which is why they're releasing a beer this spring marketed specifically for beleaguered commuters.

"As a New York based brewery, we understand the confusion New Yorkers have been faced with over these past few weeks in regard to the L train construction plans," they said in a press release today. "Blue Point created 'What The L?' to bring relief to New Yorkers during the 15 month shutdown, but at this point we're here for New Yorkers to commiserate on what the L is going on!"

"What The L?" is a helles style lager with 5.2% ABV. On the one hand, branding your beer with the L train seems like a pretty savvy move at a time when every New Yorker is talking about or hearing about it; on the other hand...they probably could have come up with a name that incorporated the L but also had something to do with beer or drinking? For example: L Of A Beer, Where's The L (In My Belly), Hold My L Train, An L For All Seasons, The L-ager, etc. 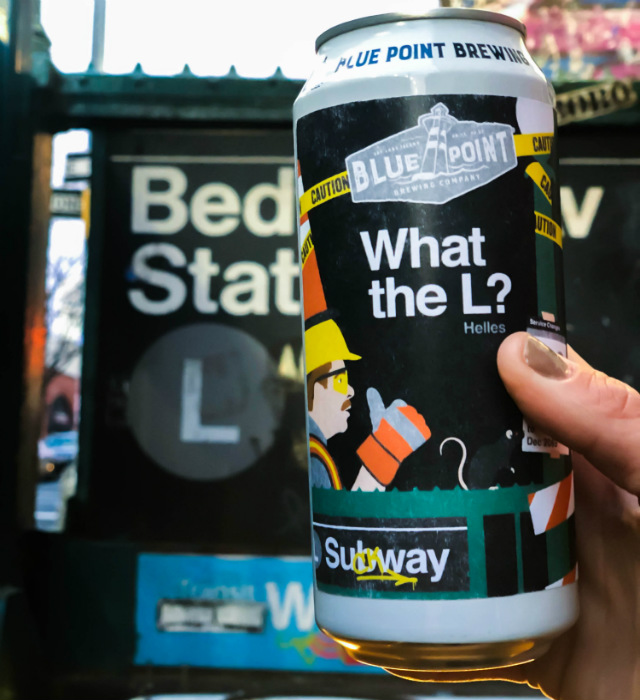 If the artwork on the beer looks at all familiar to you, that's because it's the handiwork of graphic designer and art director Winston Tseng. You might recognize his work from his provocative, fake anti-MAGA sanitation posters which popped up around the city last year with the hashtag #KeepNYCTrashFree. (It also turned Tseng into a target of Fox News.) He also was behind the "Your Train is Delayed" MTA parody ads from 2017.

While Tseng wasn't involved with the naming of the drink, he did share concerns about the state of the line: "I’m just confused by it more than anything," he told Gothamist about the L train. "The latest plan sounds less terrible, but still pretty terrible at times. As we know, New Yorkers do not like train delays or schedule changes, so I’m sure there’ll be a lot of stories to come from frustrated riders. Hopefully beer can help ease their pain."

The "What The L?" drinks should be available to purchase around the city come April, "shutdown or no shutdown!"

Update: So about that name...we asked Blue Point what other names were thrown out or considered before finalizing on "What The L?" Blue Point President Jenna Lally told us: "As we were deciding on a name, we definitely wanted something clever that incorporated the frustration New Yorkers are feeling as well as the L train name. What the L? came up pretty quickly." However, they may be having L remorse, based on a tweet this morning:

Hey @gothamist, we hear you on the name change. Let's take it to a vote. https://t.co/KaAH6m7Ga2 @yenbakas #BluePointWhattheL

#alcohol
#beer
#blue point
#l train
#marketing
#subway
#tie-ins
#winston tseng
Do you know the scoop? Comment below or Send us a Tip