Union Square Is About To Get A Lot More Vegan

Two new fast casual vegan spots are opening up in Union Square, the first of which, Blossom Du Jour, is NYC's largest vegan chain. The eatery debuts today at 15 East 13th Street and will be offering many of the seitan-based treats they're known for like their Philly Cheese Steak and the Midtown Melt, with cajun spiced seitan, vegan cheese, agave, guacamole, lettuce and chipotle aioli. New to this location will be crocks of melty Mac and Cheese plus a Quinoa Sweet Potato burger. Smoothies, salads, juices and the like are also on the menu for the calorie conscious, because those sandwiches are hefty, to be sure. 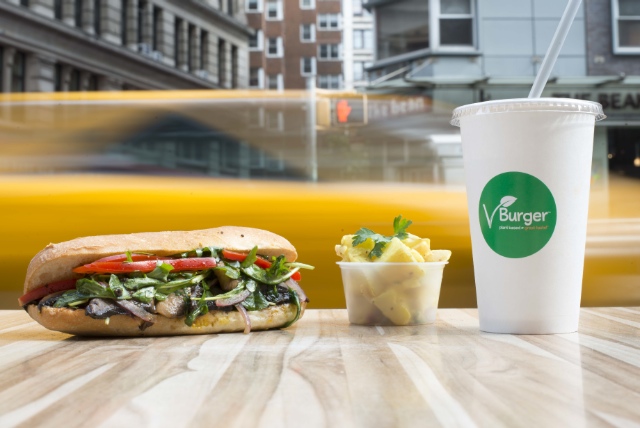 Speaking of sandwiches, nearby at 815 Broadway there's going to be a vegan burger spot called VBurger in two weeks time. There's not as much soy on the menu here; instead, there'll be burgers like the Einstein Burger, with a patty made from cauliflower and potato and a Spicy Black Bean Burger. Other sandwiches swap in mushrooms for meat like the Portobello Steak Sandwich served on ciabatta and finally, a Fried "Unchik'n" Sandwich dipped in a batter made from chickpeas. As this is a burger joint without the beef, there are of course fries and onion rings, plus vegan shakes in cherry, chocolate and vanilla.

VBurger is scheduled to open October 29th, so there's still time for the owners to come up with a less annoying name.