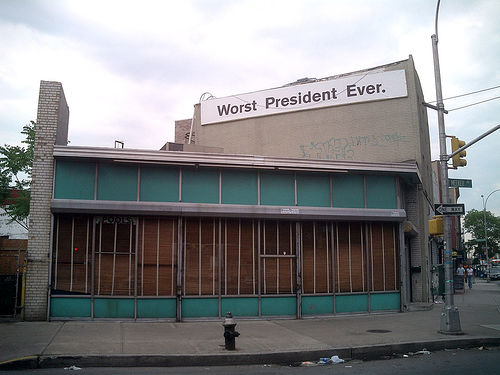 Recently, there has been a lot of "bouncer activity" at venues, bars and even directed at New York bands playing shows. We just received this disturbing report involving one gay man and a Union Pool bouncer:

Saturday night one my friends, Charlie, was beaten up by a bouncer at Union Pool after a gay dance party there. From all accounts, it was unfounded and out of nowhere, and we shouldn't let this slide!!!

Union pool is (for better or for worse) a Williamsburg institution, and it doesn't make sense for them to have bouncers who make a pretty significant portion of their patrons feel unsafe.

Apparently the bouncer became agitated by the crowd who were bemoaning the early closure of the bar. The bouncer put this particular patron in a headlock and started accompanying him out the door, then pushed him to the floor and "beat him bloody." The victim now has "big bruises around his eyes, marks on his neck like he's been strangled, and popped blood vessels in one of his eyes." If you think this is an isolated incident, there was another mention of the bad behavior at this bar when Gridskipper posted on it. A comment on the post, left just last month, reads:

RACIST and HOMOPHOBIC. my gay friends get violently, physically kicked out because they were playing tiny fake maracas by the outside patio door. I'll let you draw the conclusions.

The tipster suggests emailing or calling Union Pool. The contact info is on the front page of their website. Good and bad experiences you've had at Union Pool, or other venues/bars, welcome in the comments. We've called Union Pool for their side of the story but as of yet haven't reached anyone there.