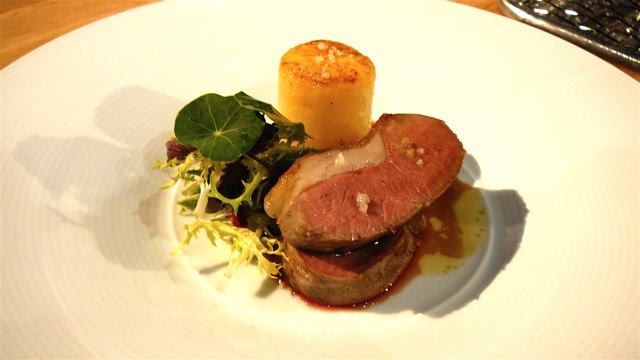 Corton, the anticipated collaboration between Drew Nieporent and English chef Paul Liebrandt, may not be opening this weekend, but shown above is a possible preview of the restaurant’s food: Lamb with cooking juices, salad, and pommes fondant.

The dish was part of the StarChefs ICC two weeks ago, where Liebrandt presented a mini-master class about the “space age” cooking technique called sous vide, where food vacuum sealed in plastic bags is cooked gently in water baths. Sous vide is currently regulated by the Health Department, for food safety reasons; restaurants (including Corton) have to file their sous vide usage plans with the city. 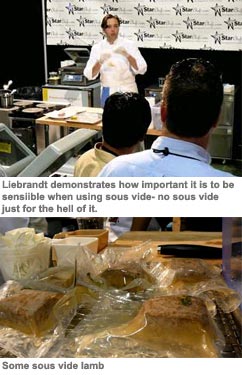 The benefit of cooking this way, chefs say, is that it renders cuts of meat—the entire piece—a perfect medium rare, but that’s just the tip of the iceberg: In a nod to sous vide’s “moment,” Thomas Keller and food science oracle Harold McGee will release a giant cookbook in November about the technique, the first of its kind, explaining its full versatility.

At the workshop, Paul Liebrandt and team shepherded cooks around workstations. Each was outfitted with cutting board and a container fitted with an immersion circulator, a piece of lab equipment that’s been co-opted by chefs for precise cooking. Vacuum packing machines were placed in the room, looking like 80s era photocopiers.

As chef of the restaurants Atlas, Papillon, and Gilt, Liebrandt became known for unconventional food pairings (think licorice with parsley), and wild presentations; it's still unclear what kind of menu Corton will feature. If it can be considered a sign, however, during his workshop Liebrandt not only shared a few bits of cutting edge food science, he also demonstrated he can just as easily be a “meat and potatoes” kind of guy.