Umami Festival Urges Artists to Play With Their Food 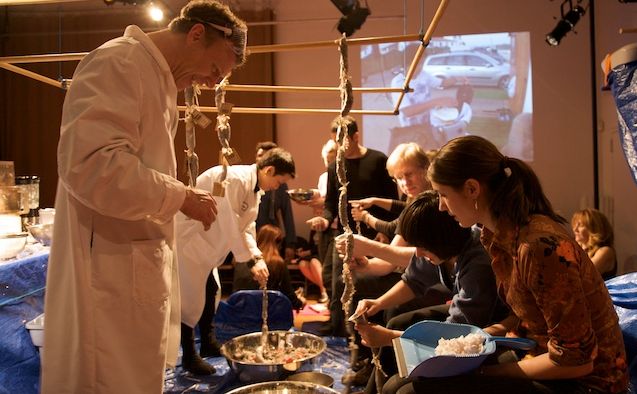 Photo of Orphic Memory Sausage by Matthew Weinreb 2008, printed with permission from the artists: Mimi Oka and Doug Fitch.

Lots of chefs consider their food to be art, but few artists see their art as food. A new festival called Umami – a Japanese word meaning "savory" or "meaty" – is trying to change all that. The ten day smorgasbord, which started Tuesday, spotlights artists and performers who use food as a medium, and also features culinary events ranging from “water tastings” to a weekend workshop for kids called “Paint With Your Food.” Just what every parent needs!

On Tuesday and Wednesday night, visitors to the kick-off performance, Orphic Memory Sausage, were asked to bring objects associated with a memory they wanted to transform into sausage – artists Mimi Oka and Doug Fitch then proceeded to pulverize all the mementos, mixing all of it into a pulp that was stuffed into pig intestines and hung to dry.

Though the sausage fest is over, tomorrow night offers something like a deranged cross between Gallagher and the Swedish Chef: Musique a'la Mode, a concert in which all the instruments are derived from kitchen products like pots, pans, bowls, cutlery, food, and liquids. And on Monday afternoon Corby Kummer, a senior editor at the Atlantic Monthly leads a panel discussion on the topic of “Experimental Cuisine” with chef Will Goldfarb (Desert Studio, Picnick), chef Heather Carlucci (owner, Lassi) and others.

Umami culminates next Thursday and Friday with Cookies, “a performance based around words derived from the linguistic milieu of food and cooking and beginning with the letters that make up the term PERFORMANCE.” Sounds like the sort of thing that would be greatly enhanced by hitting up the wine tasting that precedes it.

Most events take place at Roulette, located at 20 Greene St., between Grand and Canal. All details here.