Our latest installment of Quick Bites brings us to the Upper East Side Wahlburgers, the burger chain brought to you by the Wahlberg family.

THE VIBE
When the Boston-based burger chain Wahlburgers opened its first NYC outpost a couple of years ago just off the Coney Island boardwalk... well, it'd be no surprise if you completely ignored the news. Unless, of course, you're a big fan of Mark Wahlberg, Donnie Wahlberg, or even their brother Paul, the chef who you may have met in the reality show that centered around this joint. The place was also such a shitshow that even if you did try to go on a whim, you probably gave up, as I did (twice!), before actually eating any food.

In May, however, Wahlburgers opened a new spot on the Upper East Side, on a prime corner in the heart of that neighborhood's bar- and- casual-restaurant district, so suddenly the possibility that you might find yourself tucking into a Double Decker with "Wahl sauce" didn't seem so remote.

The exterior of the place is actually pretty appealing, with big, wrap-around windows and contemporary signage. And once inside, it's more endearingly goofy than outright tacky. Recessed into the ceiling, for example, are the names of Mark's movies, and Donnie's band, NKOTB. There are also billboard-sized posters advertising Wahlburgers, the very restaurant in which you are sitting. The main room has a bar (with a full liquor license), a few booths, lots of tables, and there's even additional seating on the sunny but cramped "terrace." The servers work hard to be excited about your meal.

THE BITES
You might by tempted by some of the less common comfort food dishes on the Wahlburger menu, but really you need to stick with the basics. The Our Burger ("Paul's Fave") is a solid, satisfying, upper-middle-tier NYC burger, well-built and -balanced with fresh ingredients. The Tater Tots, too, are decent enough, like good cafeteria food. But things really fall off a cliff after that.

Mom's Sloppy Joe ("Mom's Fave") is just gross—a sweet open-faced mess, whatever meat there might be buried under a red sauce, a white sauce, and an orange sauce, none of which taste like anything in particular. Those onion rings on top are also available as a side, but either way their dominant flavor is "fried." Even worse is the Thanksgiving Day Sandwich ("Mark's Fave"), which promisingly piles on such expected "leftovers" as turkey (in burger format), stuffing, cranberry sauce, mayo, and butternut squash, but tragically it tastes and mouth-feels like a mound of soggy bread.

Wahlburgers also makes a play at the franken-milkshake game offering a menu of Colossal Frappes (with predictably poor results). My companion and I tried the Wahlburger Cupcake Frappe, which takes a standard chocolate shake and extremely unnecessarily adds super-sweet fake-chocolate frosting and M&Ms to the glass, then plops a mini-cupcake on top, but we could only get a few sips/bites in before succumbing to processed-food sugar shock. 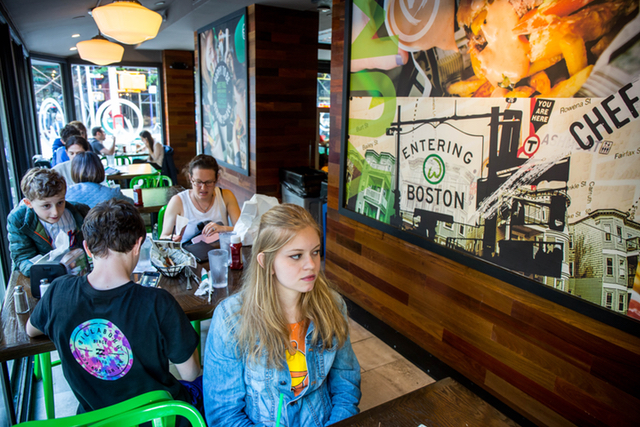 Everyone is happy at Wahlburgers. (Photo by Scott Lynch/Gothamist)

THE VERDICT
If your life involves scenarios in which you might conceivably find yourself hungry on the corner of Second Avenue and 85th Street, you could do worse than the most simple burger here. Just don't stray from there. And for godsakes skip dessert.

#quick bites
#upper east side
#wahlburgers
#original
Do you know the scoop? Comment below or Send us a Tip