Trader Joe's is beloved by the wine-drinker-on-a-budget for their Two Buck Chuck (or is it three bucks these days?). The wine goes down pretty easy, and even your dinner party guests with a more refined palate will think they're drinking at least a $6 bottle. But how is this stuff so cheap, anyway? Unfortunately, someone had to ask. 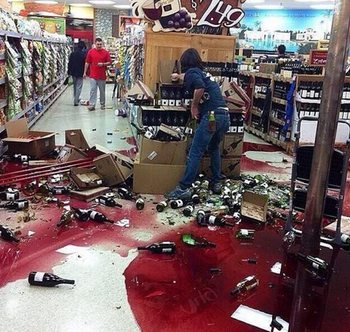 First, Two Buck Chuck (technically, Charles Shaw) is owned by Bronco, which is owned by the Franzia brothers (we are told they are not related to the low-alcohol sugar water pawned off as wine and sold in a box). In an online comment, wine shop owner Chris Knox alleged how Franzias manage to keep Two Buck Chuck at such a low, low price:

"These large tractors with huge claws go down the rows of vineyards grabbing the grapes and depositing them in its huge receptacle. And it not only grabs ripe grapes, but unripe and down right rotten ones as well and throws them all together. Add to that leaves, stems and any rodents, birds, or insects that may have made those vines their home—they all get thrown into the bin as well. And guess what? You think there's going to be any sorting when that truck arrives at the winery (or should I say processing facility)? Nope. Everything, and I do mean everything (including all those unripe grapes, rotten grapes, leaves, stems, birds, rodents, and insects) gets tossed into the crusher and transferred to large tanks to ferment.

You know what really levels out that animal carcass taste though? Sugar.

If you were to taste that wine right after it was made, I guarantee you it would be undrinkable. They will then manipulate the finished wine in whatever way necessary, including adding sugar or unfermented grape juice if needed to make the wine palatable. And then the wine goes into bottling, packaging and shipping facilities, all of which Fred Franzia owns himself. They then get put on trucks (also owned by Fred Franzia) and shipped to Trader Joe's."

As StarkInsider points out, Knox's comments were made 3 years ago (only recently being dug back up and recirculated), and there's no actual proof to any of these claims. Maybe Chris Knox is really Carlo Rossi, and trying to take out some competition! What we do know is that Franzia has been dubious in the past, and even forced to step down from Bronco at one point for "misidentifying grape varietals on its labels." We also know that a good $2 wine is too good to be true.

Keith Wallace, executive director of The Wine School of Philadelphia, has also commented on the quality of the wine, and spoke of a production process that resembles that of soda: “A lot of people are saying that this stuff is as good as anything else. It’s not. It’s just crap... This wine is made in a factory, with a lot of synthetic and concentrated products, like grape musk, added to manipulate the flavors from bad grapes."

We reached out to Bronco and the Franzias for a comment on how their Two Buck Chuck wine is produced, and they responded with the following statement:

"The Two Buck Chuck attack was started three years ago as a comment from a prejudiced wine shop owner on the Quora web site. It contained falsehoods and incorrect winemaking information, and didn't get much notice until The Huffington Post picked it up this week. In one case it says that California allows added sugar, in another it says that mechanical harvesters pick up animals! Several other blogs have now covered the item, including renown writer Steve Heimoff. But in today's social media environment false statements and angry opinions are left unedited, so there have been some additional pickups. Most people know that the reputations of Trader Joe's, the Bronco Wine Company and Charles Shaw wines demonstrate only good faith with their customers. The production process of Charles Shaw wines, known as Two Buck Chuck, is a completely state-of-the-art, top-rate process with extreme quality control in place every step of the way from the vineyard to the case of wine."

So it all comes down to who to believe. Maybe just buy some VRAC.

UPDATE: Knox has made some new comments, below: 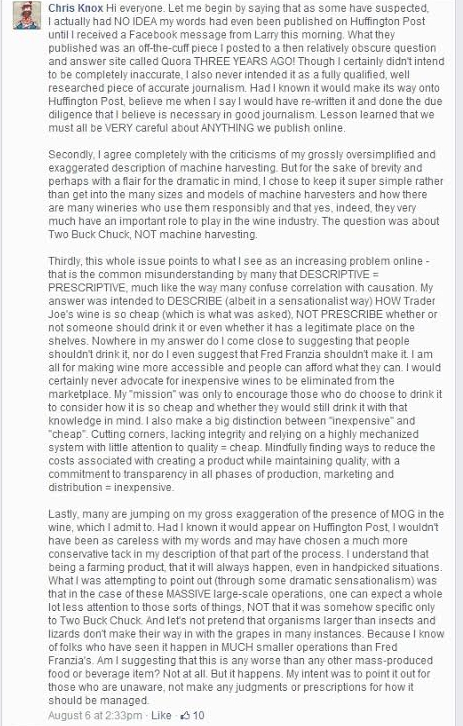