What’s worth watching on food-TV this week? 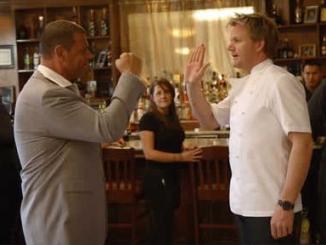 But the prime time highlight might be a repeat of Tuesday night's Kitchen Nightmares (9pm on Fox). Gordon Ramsay makes over Peter’s in Babyon, NY, and if you ever wanted to see an overly tanned rage-a-holic try to beat up a bill collector (and knock his own father down in the process), offer to get a manicure while everyone is doing work and then try to deflect criticism by saying, "Blame everything on me! Blame fires in Chicago, Hurricane Katrina, 9-11 [on me]," you'll want to see this. Really, it's amazing.

Also on this week: No Reservations is on tonight in back to back repeats (10 and 11pm on the Travel Channel); Bourdain goes to Puerto Rico and India. And next Sunday After Hours with Daniel (Boulud) is on at 8:30pm on MOJO. And in Food Network news, after 10 years, Emeril Lagasse tapes his last episode of Emeril Live on December 11. He’ll continue to produce the show Essence of Emeril. Bam!