Our latest Quick Bites brings us to East 4th Street for some Korean-style fried chicken, short ribs, and classic tunes.

THE VIBE
You might expect that a restaurant called Turntable 5060, "Playing Hits From the '50s and '60s," would have crates of old vinyl and a couple of retro decks, but you would be wrong. Turntable 5060, an offshoot of a similarly-named Jazz-centric spot in Midtown and a Karaoke place in Koreatown, goes even more old-school than that, with the largest collection of vintage reel-to-reel tapes that you've likely ever seen. And though there's a stack of vintage tape players in the DJ booth at the back of the main dining area, all of the actual music at Turntable 5060 comes out of an iMac with an animated reel-to-reel spinning on the screen. Huh.

None of the above really explains anything about anything, other than the owner likes to collect reel-to-reels, but the design of the place—all old-barn wooden beams, farm-y knickknacks behind chicken wire—begins to hint at why you're dining at this East Village establishment, and not one of a hundred of others within a three blocks radius. Because even though Turntable 5060 has a rangy menu of bar food, and most of your fellow patrons are in their twenties and drinking beer from a glowing candy-colored fog machine bubbling away at their table, all you really need to know about this place is: Korean Fried Chicken. 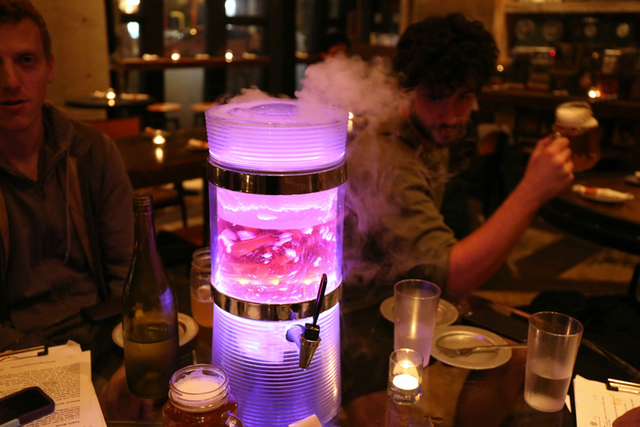 THE BITES
Korean-style fried chicken isn't exactly rare these days, but Turntable 5060 serves up a first-rate version. On both the wings and drumsticks I tried (they don't sell thighs, my usual chicken part of choice, but you can get strips of boneless breasts), the skin is lightly crisp rather than crackling, with very little batter getting between you and the moist meat inside. The sauce is applied after the double-frying is done, and you can get your bird either Soy Garlic style, which is potent and addictive, or Hot & Spicy, which is even more so. Or better yet, get some of each! Turntable 5060 allows to you to go half-and-half on even the smallest order. 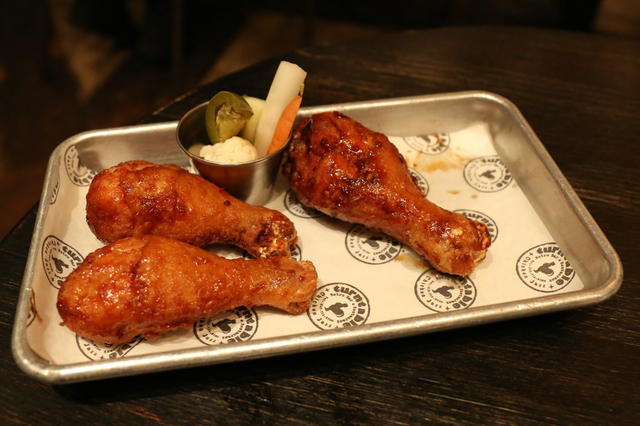 Other appetizers include a Chicken Rice Porridge, which is garlicky and creamy, not gluey at all, and will likely be even more satisfying a starter when winter hits. Don't bother with the Smoky Hand Cut Fries, which came with my Bulgolgi Burger and were limp and flavorless, designed mostly to be dredged in ketchup.

If it's fried potato you're after, much better to get the Twister, a state-fair-looking beast on a stick, the spud twirling round and round and sliced so thin that it achieves that pleasant crisp/chewy combo. This is silly, peel-and-eat food, but it's also a lot fun, and the spicy mayo gives it kick.

About that Bulgolgi Burger, I'm not sure whether they were running out of meat that night and had to ration or if I received the usual portion size, but the well-marinated, sauteed strips of beef were put on with such a stingy hand that until you reorganize things it mostly eats like a bready, lettuce sandwich. To the kitchen: your beef is good, especially with that melted mozzarella all over it! Please give us more!

Finally, at the kitchen's suggestion I tried the Braised Short Ribs, the most expensive single item on the menu at $15, and chef was absolutely correct in his recommendation on this. The beef was meltingly good, the pickled veggies an odd/pleasing touch, the chewy barley provided some heft, and there was even a surprise ingredient, several soy-soaked chestnuts providing hits both salty and sweet.

THE VERDICT
If you're 25, like to drink beer and eat garlic, Turntable 5060 is solid choice for some Alphabet City food and fun, never mind that the music during dinner might be the entirety of the White Album. But even older and less wooo-hoooo-y types will enjoy some good chicken and a high percentage of winners from the rest of the menu as well. 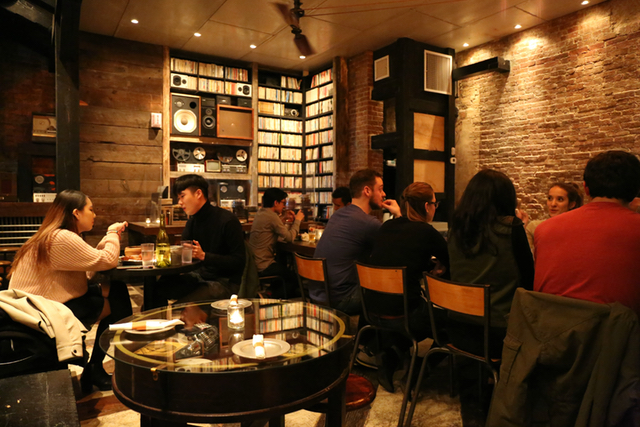