Our latest installment of Quick Bites brings us to a vegan spot on East Broadway with turmeric tortillas AND turmeric queso.

THE VIBE
Changes on the eastern edge of Chinatown—sorry: in the Two Bridges neighborhood—continue apace with the opening last week of Jajaja, a vegan Mexican restaurant that took over the corner of East Broadway and Rutgers, once home to the Golden Carriage bakery and a newsstand. Yes, it's another cool-kid hangout in an area already lousy with happening spots (Dimes, Forgtmenot, L.E.S. Kitchen, Mission Chinese, et al), but Jajaja is so pretty and inviting, and the food so unique and appealing, that it's difficult to begrudge the incursion.

The name, of course, is the Spanish version of Hahaha, which may not pair up with the aesthetic or menu, but I guess it's meant to suggest general conviviality, of which Jajaja offers in abundance. The staff is warm and welcoming, and the general atmosphere is that of a comfortable, low-key party somewhere far away.

There's a take-out counter for snacks and juices when you first enter the space; turn left for a pair of elevated booths across from a small, tequila-stocked bar, and just a few steps back in the cozy main dining room you'll find a ring of tables set before ample, louvered windows. The decor relies on patterned tile, turquoise, and growing things. A small crowd of locals were waiting for the doors to open on each night that I ate there over the weekend. It's hard to imagine this place not becoming a hit. 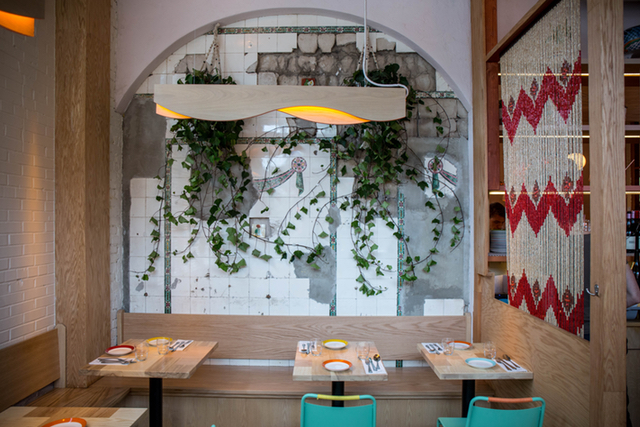 THE BITES
Jajaja is still parceling out its plant-based menu a few dishes at a time—the full slate should be available by the next week, one of the owners said—but there are already plenty of good options from which to choose.

Under tacos, get the Chorizo, which is one of those rare "fake-meat" situations that, if you're not vegan, satisfies almost as much as the real deal. And if you are vegan, just tastes delicious, no comparison necessary. The housemade turmeric tortillas enveloping these beauties were perfectly cooked, with accompaniments of avocado, cilantro, onion, and sour cream piled on with a generous hand. The Shroom tacos, made with meaty portobello and beech fungi, were less successful, mostly due to their limp tomato-and-beet shells.

One night I tore through a molded mound of Hjiki-Hearts of Palm Ceviche, a vinegary, briny concoction that packed plenty of jalapeño punch. This was served next to some excellent fried sliced plantains, which also made an appearance with my order of Sikil Pak, a pumpkin seed and habanero dip described by my server as "Mexican hummus." More familiar, but equally exciting to plough through, was Jajaja's Nachos, the thick and salty corn chips strewn with more of that faux chorizo, fermented beans, and turmeric queso fundido.

Most surprising was how much I liked the Chile Relleno, which sounded overly fussy—a fat poblano pepper is stuffed with a sweet quinoa salad, then topped with seedy dukkah, creamy nogada sauce, and crunchy pomegranate seeds—but it totally works, like a well-composed grain bowl in a fun new format. The menu could use a few legitimate entrees, but presumably those are coming.

THE VERDICT
Veggies and vegans will obviously enjoy Jajaja—this is some first-rate food, prepared with care and perfectly plated—but there's plenty of room for omnivores here as well.

Jajaja is located at 162 East Broadway at the corner of Rutgers Street and is open weeknights from 5 p.m. to midnight, and on Friday and Saturday until 1 a.m. (646-883-5453; jajajamexicana.com)

#jajaja
#quick bites
#Two Bridges
#vegan
#original
Do you know the scoop? Comment below or Send us a Tip