No, Williamsburg super dive Turkey's Nest Tavern is not closing—but the owners kind of want you to think it is! A sign popped up in the bar's window today declaring a restaurant called Fu-manchu's Sushi Palace was "Coming Soon" to the Bedford Avenue space. Meanwhile, a worker was whitewashing the bar's cheeky turkey sign from the front of the building. What gives?

"We wanna have some fun with all of yas!" one of the bar's owners told us through guffaws on the phone this afternoon. They're going to be changing the bar's logo to depict a turkey holding a beer, the imagery that's currently emblazoned on their t-shirts. "It's going to take about a day and a half to put the new sign up so I just figured I'd drive everyone a little crazy. They do a good job driving me crazy," he laughed. "There's nothing going on." 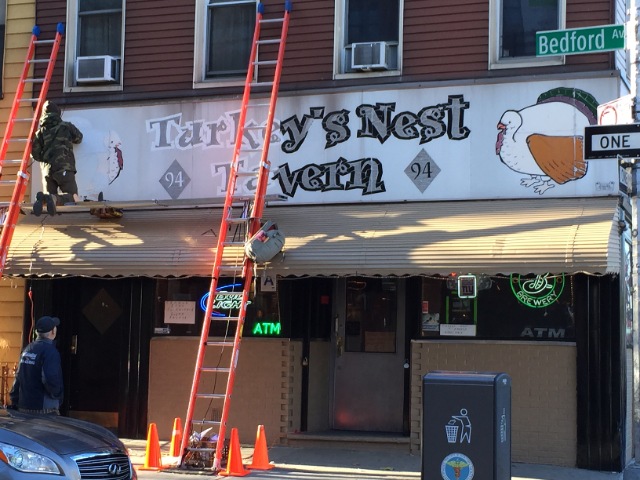 "I put a nice sign in the window because everybody always drives me crazy about selling out," he said. "Just having some fun." Fun...and culturally insensitive? At least gigantic styrofoam beers are safe—for now.

#troll
#turkey's nest
#williamsburg
#original
Do you know the scoop? Comment below or Send us a Tip