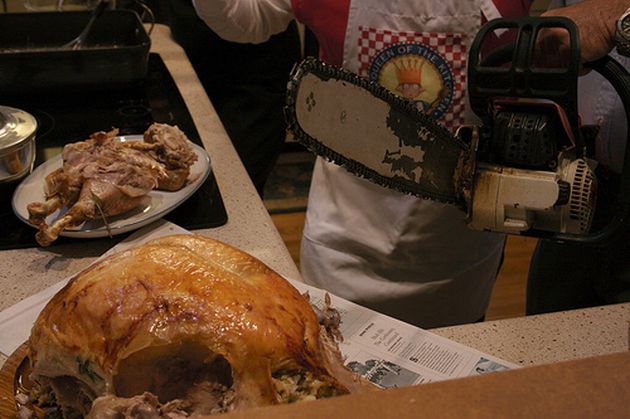 According to Turkey Carving for Dummies, every year hundreds of thousands of people wind up in hospital emergency rooms as a result of kitchen accidents involving knives. Don’t become a statistic! In yesterday’s article about the best way to carve the turkey, the Times helpfully points out the wrong approach, to be read aloud in a southern accent:

“One year the turkey took a long time to cook and I went to carve it after about 13 beers,” said Maurice Landry, who lives near Lake Charles, La. “The way I remember it, I bore down to take off the leg and the whole thing went shooting off the platter and knocked over the centerpiece.”

Come T-time, should you find yourself tasked with that heavy responsibility despite a lack of experience, don’t panic – there’s help online. Just surreptitiously grab a sharp knife, steal a nearby child’s stuffed animal and withdraw to a locked room with a secure internet connection. Using the online version of the Times article, you can practice proper carving technique while watching an instructional video led by third-generation butcher Ray Venezia. He strongly advises throwing out that antiquated, Norman Rockwell-esque image of carving the turkey at the dining table; his approach involves boning and slicing that bird in the kitchen and elegantly delivering the results to the table on a platter. Ever the maverick, Venezia also eschews carving forks. (“Why pierce the meat more than you have to and let the juices run out?”) Some other Cliffs notes:

Start by cutting off the dark meat: legs and thighs.
Cut through the joints, not the bone, to get the meat off. Then slice the meat.
After thighs, wings.
After wings, breast. Follow the curved breastbone with the knife tip, then pull apart.
Slice the breast meat AGAINST the grain.

Ex-con Martha Stewart has her own ideas on how to shiv a turkey, as do these hand surgeons, who’d really rather not be bothered today. They’re reminding you to cut away from yourself and keep your knife handle dry; a wet handle can cause your hand to slip down onto the blade resulting in a nasty cut. For the carving completist, there are more insights here and here, but to be quite honest we’re considering saving ourselves the headache entirely by cooking up a Hotchken and ripping it open with our bare hands.