The latest in our Quick Bites series brings us to Park Slope for a pastry dome filled with pasta, and so much more.

THE VIBE
South Slope just got so, so lucky.

For a remarkable 35 years the storefront on the corner of 11th Street and 7th Avenue had been kept deliberately empty and shuttered by its "cranky" landlord Leo Bates. (The story behind the decades-long vacancy is fascinating, and told well in this New York Times piece from a few weeks back.) When Bates died in 2013, his widow Ellen finally sold the building, and the new owner promptly rented out the storefront to a pair of locals, former caterer Rebecca Tory and her husband (and chef) Andrea Taormina.

And so, instead of something boring or a generic chain (always the fear), the neighborhood gets Hugo & Sons, an attractive, super-friendly Italian restaurant AND, around the corner, a soon-to-be-opened pizzeria with a combo wood- and gas-burning oven, which chars up pies for both places.

There are eight or so pizzas on the Hugo & Sons menu, which Chef Taormina, who's Sicilian by birth and culinary heritage, complements with an appealing array of salads and pasta, just enough surprises and old world rarities thrown in to keep even jaded eaters on their toes. Plus it's all gently priced, and, just one week in, certain South Slopers are already making it their "regular".

Really: this is a big win for a stretch of Brooklyn that often reminds me of the Upper West Side, restaurant-wise: tons of places to eat, most of them mediocre at best. 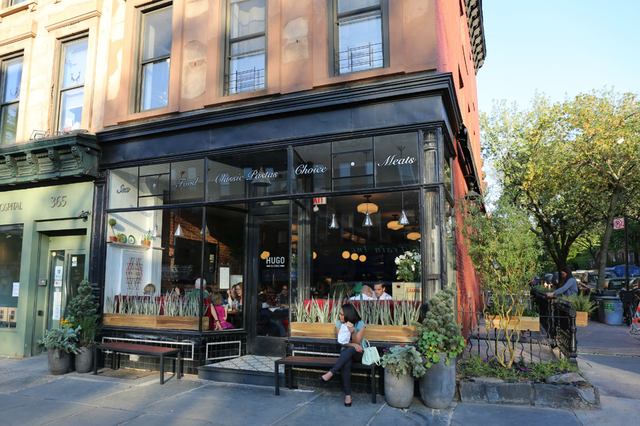 THE BITES
I ate at Hugo's twice during opening week, and everything was terrific. The pizza is served in entrée-sized pies; I had the Fiamma, which features funky sopressata, pickled jalapeños, gooey mozzarella, sprightly tomato sauce, all on a crust that does its job while maintaining a solid char/chewy ratio. Given the attention paid to the ingredients, plus the care put into its execution, I imagine any number of the other pizza choices would be good as well.

The pastas are possibly the restaurant's strongest suit, especially the excellent Pappardelle, which Taormina makes (and makes well) in house, and is topped with spicy Italian sausage, chunks of caramelized fennel, and—key stealth ingredient alert!—a hit of lemon zest, which is apparently a Sicilian thing and wakes the dish right up. This is was my favorite dish.

Taormina also does an old-school Maccheroni Dome, which is basically tube-y pasta with meatballs, ham, creamy tomato sauce served inside a puff pastry. Like that dish in Big Night. And though it maybe doesn't grab you at first bite like the pappardelle, the more subtle flavors and textural delights make it a satisfying dish.

Then there's the classic Nicoise, which seems a little out of place, but is a first-rate version of the salad, the seared-rare tuna and bright haricots perfectly prepared, united by tomatoes, balsamic, and crackly homemade potato chips. I can't imagine this won't be a big summertime hit here.

Another reason to fall for Hugo and Sons: the rotating snacks your amiable server puts on the table as you get settled in. On my first night the freebie was a lively olive dip with basket of soft bread; next time up I devoured the artichoke purée, which came with several
of those freshly-fried chips. A nice, homey touch.

THE VERDICT
I don't want to oversell the spot, but Hugo and Sons is a great local hang, and a much less pricey alternative to across-the-street Talde. Good for pre- and post-gaming anything going on in this neck of Prospect Park, too.

Oh, and as you would expect if you've ever spent 45 seconds in Park Slope, an early dinner at Hugo's will be shared with lots and lots of kids, so plan accordingly, depending on occasion and mood.

Hugo and Sons is located at 367 7th Avenue, on the corner of 11th Street, in Park Slope. Dinner hours are 5 to 11 p.m. on Monday through Thursday, until midnight on Friday and Saturday, and 10 p.m. on Sunday. Brunch coming soon.