Cronut, Bruffin, Crogel, Dough'ssant, the boringly-named Croissant-Donut—what pastry hybrid am I forgetting? Until today, it was The Bisgel (biscuit-bagel) from Lower East Side's dining "speakeasy" Kitty's Canteen, which has spawned a takeaway shop, Kitty's a-Go-Go, opening Friday. The name has been trademarked by Kitty's co-owner Richard Kimmel, who owns the restaurant with business partner Snoop Dogg.

The Bisgel ($2 plus toppings), which looks pretty scrumptious if we're being real, isn't the only buzzy menu item that'll be available during lunch, dinner and for delivery once Kitty's opens. "Kitty’s Famous Matzo Meal Fried Chicken" ($12) got some buzz when it debuted last year; it's served with a black pepper parmesan spoon bread and a pastrami gravy, which can also be a Bisgel topper, too. New sandwiches get the Jewish-Soul Food spin, too, including a Pastrami Reuben and a Catfish Po'Boy (both $12) created by chefs Kathy Johannes and Stephanie Teekaram. 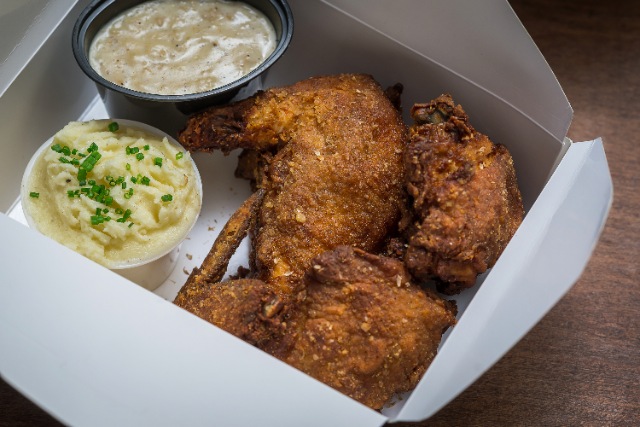 The 10-seat takeaway spot will sport a similar aesthetic to its sister restaurant, so imagine a hodgepodge of styles, designs and decorations and the cat-sketched wallpaper that nods to namesake patron "Kitty" Kimmel. Look out for the neon "Hot Pies Meow!" sign and take the hint to order one of the restaurant's hand pies, which come in Chocolate Pudding, Blackberry, Peach, Lemon Meringue and Apple flavors.

#bisgel
#kitt's a-go-go
#kitty's canteen
#LES
#Lower East Side
#original
Do you know the scoop? Comment below or Send us a Tip