A new East Village eatery opening tonight wants to introduce the unique flavors of Acadian culture, a subset of Louisiana peoples with roots in French Canada. King Bee, which counts Samuelsson Group (as in Marcus), Pearl & Ash and New Orleans's Herbsaint alums as its creators, will bring country cooking from a region that's not highlighted as frequently as etouffe and po' boy-strewn bayou restaurants. Think farmhouse fare—including herbs and produce from the restaurant's backyard—with a bit more panache than a barnyard kitchen.

Chef Jeremie Tomczak has devised a delicious-sounding menu of rustic eats one could imagine devouring after a day plowing a field. A meal might start with Pork Cracking with Peanut, Cane caramel and a malt vinegar powder or a more substantial Louisana Crawfish and Brioche with tasso ham and radish. From there, move on to Venison Tartare with liver pate, barley and wine sauce or a more substantial bowl of traditional Duck Fricot, a meat stew with carrots, swiss chard, dumplings and savory, a plant in the mint family. 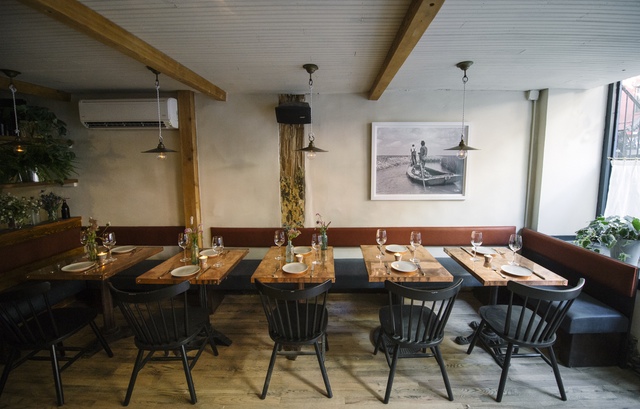 The farmhouse feel continues in the charming interior, which would look just like a 19th century replica without modern conventions like electricity and air conditioning. The space boasts just 60 seats, beneath exposed beams and a wooden ceiling; adornments are at a minimum, though there's a lovely fireplace and a photograph of a Louisiana oystermen by historical Louisiana photographer Fonville Winans. The only thing that reminds you this is still New York City is a cocktail named for ubiquitous guitar teacher Dan Smith, a Plum Shrub made with Cocchi Rose. Speaking of music, we'll let The Band take it from here:

#east village
#king bee
#new restaurant and bar radar
#original
Do you know the scoop? Comment below or Send us a Tip