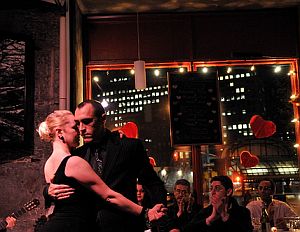 Tribeca’s 15-year-old Franklin Station Café will close next month, and the Downtown Express has a nice, long goodbye (928 words!) to the neighborhood mainstay. The French and Malaysian bistro, located at the corner of West Broadway and Franklin across from the 1 train stop, was one of the few moderately-priced places left in the increasingly cost-prohibitive neighborhood, and had long been a favored hang-out for locals.

No surprises here, folks; the closure was brought on by an impending rent hike. Owner Mei Chau received a letter from the building’s management company announcing an increase to $20,000 a month, which the company stressed was non-negotiable.

I could probably pay it, but it would be too stressful. Our customers asked us to raise our prices so we can stay. When we opened we had so many artists — working artists — that was the trend at that time. A lot of artists moved out and the rich moved in. We still have our regulars, but it’s down.

Chau and her husband vetoed raising prices, insisting it wouldn’t be a bistro if it was unaffordable. Instead, the couple plans to use their downtime to compile a cookbook. But they’ll go out with a big party on June 10th from 10 a.m. to 11 p.m., featuring free food and drinks, a cooking show and music. [Via Eater.]

#bistro
#close
#closing
#franklin
#Franklin Station Cafe
#french
#malaysian
#restaurant
#tribeca
Do you know the scoop? Comment below or Send us a Tip