Trader Joe's Coming To Brooklyn, For Real This Time 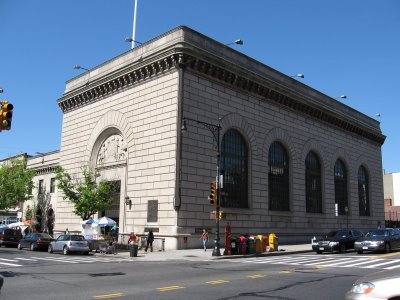 Earlier this year, The Sun reported that AvalonBay Communities would "begin construction this summer on a 42-story, residential market-rate tower with approximately 600 units. The property will have ground floor retail, which could house the borough's first Trader Joe's market." And even earlier this year it was suspected that TJ's would move into One Brooklyn Bridge Park.

Today, The Brooklyn Eagle is reporting that Trader Joe's will soon be stocking the fridges of many Brooklynites as the store will be moving into the (Two Trees-owned) former Independence Savings Bank building, at the corner of Court Street and Atlantic Avenue (sorry Urban Outfitters fans).

While there's been no official announcement yet, it looks like this time it's really going to happen - a good thing for Brooklynites who have been suffering from TJ's envy. The store will be placed "at the juncture of three affluent brownstone neighborhoods: Brooklyn Heights, Cobble Hill and Boerum Hill," and while the Eagle refers to it as "an upscale supermarket," it's usually quite affordable (especially compared to Whole Foods).

The bank building was originally going to be converted to condos, with an apartment building built in the parking lot linked to the bank! The Eagle mentions that "for a variety of reasons, a decision by the Landmarks Preservation Commission made it impossible for that link to be created." However, the new building in the lot will still be built...so looks like parking will be an issue, for those with a car.