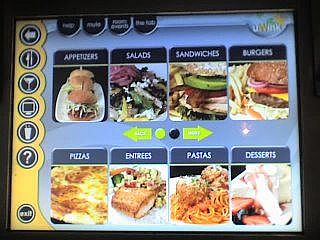 The company that founded Chuck E. Cheese, which famously replaced lazy live musicians with ruthlessly efficient animatronic animals, now has their sights trained right on your server. According to this breathlessly excited vision of the future, soon “a new trend will be found at your favorite restaurants”! [Emphasis added.] Computerized touch screen ordering at your table is destined to radically marginalize the entire restaurant service industry, liberating diners from the bondage of inattentive service and tedious chit-chat with the help. Best of all, you don’t have to tip a touch screen! Oh, and there’s games, too! And ads!

Developed by uWink, the technology has thus far been rolled out in a L.A. restaurant of the same name, where local customer Amanda Rosengarten deemed it “cooler” dealing with a living person. uWink plans to expand the restaurant franchise rapidly, with New York a logical next step toward the goal of totally eradicating human interaction. Though hand-wringing critics “fear the trend will lead to less attentive waiters”, a spokesman for the National Restaurant Association insists that “many of these systems actually have controls in them which can summon the wait staff upon demand.”

What would be even cooler would be to attach electronic collars to the staff that could generate a mild electric shock when assistance was needed. (Perhaps growing in voltage the longer you wait?) And until restaurants install table-side pneumatic tubes to whisk food to diners, a human element will still be necessary to actually fetch the orders. And ask you if you’re still working on that.
Photo of uWink touchscreen by L.A. & O.C. Foodadventures, who has a review of the L.A. location.