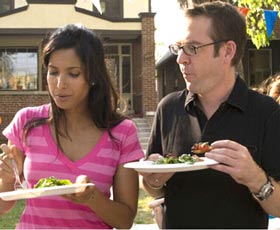 On Wednesday night's episode of Top Chef, judge Ted Allen (pictured here with Padma Lakshmi) attributed the birthplace of the Waldorf Salad to somewhere in "middle America," an error that raised the eyebrows of foodies who know the salad's true inventor: Oscar Tschirky, who created it in the late 19th century while working at New York City's Waldorf Hotel (precursor to the Waldorf-Astoria).

Yesterday, Gothamist took the rare step of publishing one of the thousands of "open letters from the grave" we receive on a daily basis, from the ghost of Tschirky himself, excoriating Allen for denying him the culinary credit he so justly deserves. Today Allen responds, presumably after suffering through the first of many sleepless nights haunted by Tschriky's indignant ghost.

All righty, then: touché on your Waldorf Salad open letter—I enjoyed it. Point taken. Yes, the Waldorf Salad was invented by a chef at the Waldorf-Astoria hotel. In the 1800s. Which is approximately the last century that anybody with a creative or adventurous palate served it. (Which is not to say that it's not delicious—of course, it very much is.)

But since then, the venerable combo of mayo and apples—like so many dishes that once were innovative and now are clichés—became more the province of, well, the provinces. Such as that from whence I sprang so long ago: Ohio.

Which is why, if you Google "waldorf salad" right now, at this very moment, the second citation you will see is this one.

On his new website, Allen tells readers how he learned how to cook (practice!) and that he's "all about pork" these days.